…thanks to Sue W and GC for hosting the Weekly Prompts https://weeklyprompts.com/2023/01/21/weekly-prompts-weekend-challenge-bend/

Bending implies that you or something is flexible, either physically or mentally. When a person bends mentally they are able to see both sides of an opinion or argument and can ‘bend’ or change their own way of thinking. Bending physically is easier to demonstrate in photographs.

….what a great season

This was the first year, since 2020 where we were able to play a full season and with fewer restrictions. Many of us, including myself, had the experience of playing in tournaments with other clubs and with the addition of 30 new members in our club alone we made a lot of new friends.

Thursday evening was our last opportunity to play. It was cold and windy but enough members came out to play on three rinks. Today the city came by and laid a layer of sand to the pitch which prevents us from playing into next week. In a couple of weeks we will have one more opportunity to get together and share a meal at a local restaurant.

….thanks to Debbie Smyth from Travel With Intent for hosting OWS https://travelwithintent.com/2022/07/10/draft-one-word-sunday-ows/

Summer for me is the cottage. With preparing for the my solo art show, hanging the show, attending the gallery to greet people and now closing the show I have yet to get to my summer home. There have been other issues as well, such as not being able to get to the island because the the ferry broke down, was repaired and then broke down again. Even though the passenger ferry is running and a barge was provided I couldn’t bring myself to open the cottage on my own. This coming weekend, my daughter and daughter-in-law are able to help me. In the meantime I’ve enjoyed ‘Summer’ from the city.

As many of you know I live down by Lake Ontario and am blessed with a string of beautiful parks in my neighbourhood. Here is summer so far, this year, for me.

Down the street from where I live we have a lawn bowling club. It’s been there for 120 years. It was established June 24,1902 and is the oldest lawn bowling club in Toronto. I’ve been walking past the greens for decades and never gave playing the game a second thought until my neighbour across the street recruited me and two other neighbours to join. This happened shortly after I retired from teaching.

Even during COVID we managed to keep the greens open with a very limited number of players. This season we’re back in full swing and hoping to bring more members into the club. People laugh when I tell them I’ve joined the club but after our open house last week where the public could try lawn bowling for free, more people, young and old, saw a new side to lawn bowling. It is not just a sport for the elderly. It is challenging but not too cumbersome and it’s a lot of fun. 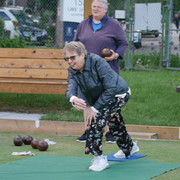 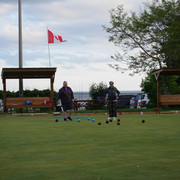 …..sorry for the late submission of my own challenge

I really have to learn to post my trios the night before or early in the morning. These photos were taken on Thursday evening when I was playing lawn bowling.

If you have photos of trios post them on your blog, title it Thursday Trios, copy my link and paste it into your post so that I get a pingback and I’ll be sure to comment on your post.

….for this week’s Thursday Trios I have a variety of subjects

Sorry for the delay for this week’s Thursday Trios. I had every intention of posting right after I returned from visiting a friend who is convalescing in long term care. While I was there the city was hit with a massive rain storm and when I got home I discovered that our internet was out. It took hours before it got up and running again.

….thanks to Amy for hosting this week’s Lens Artist Photo Challenge

Summer is different this year. So far I’ve spent all of it in the city. I miss the Island and hope to get up there soon. 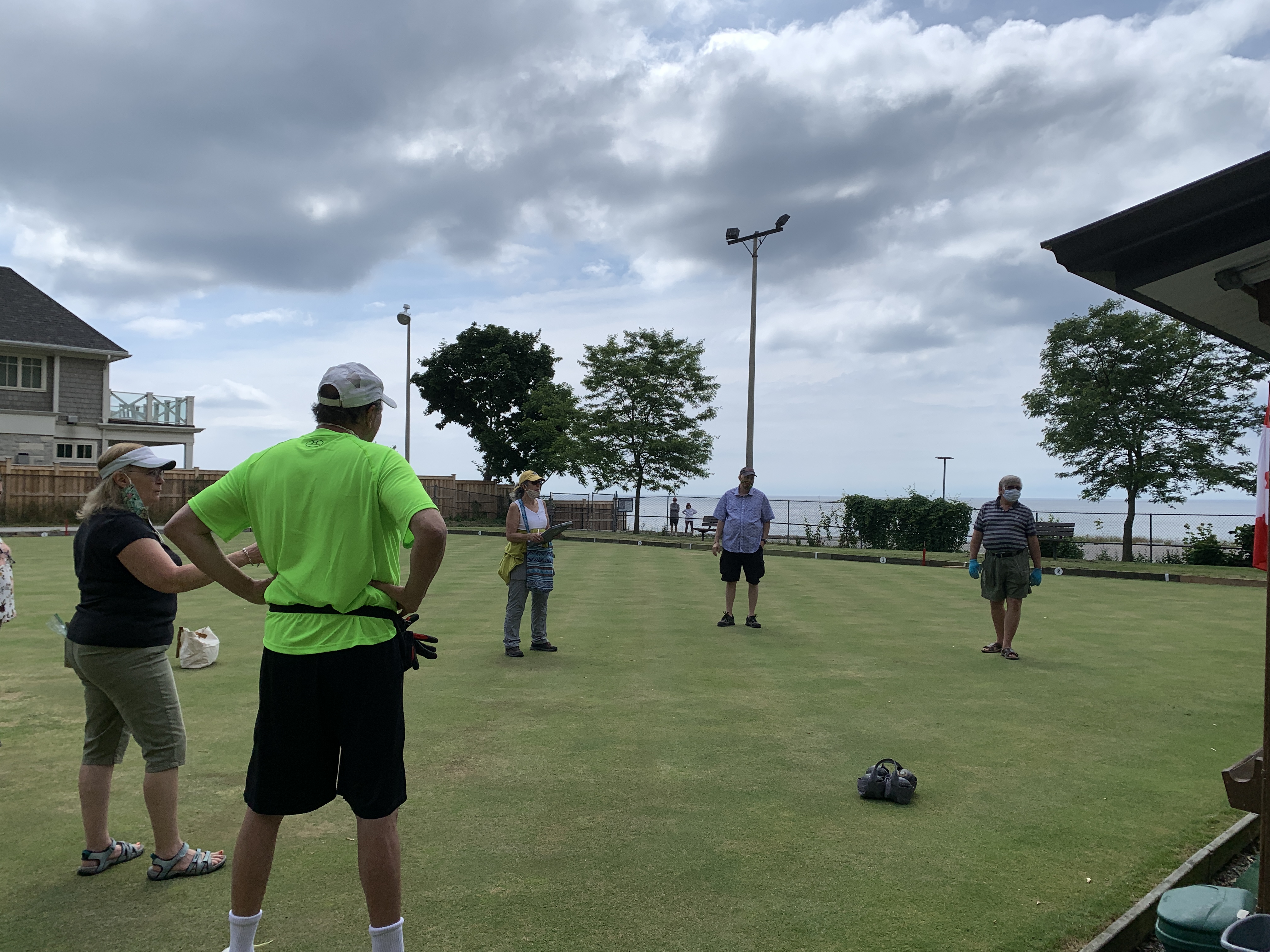 Swimming off the shores of Lake Ontario in Toronto 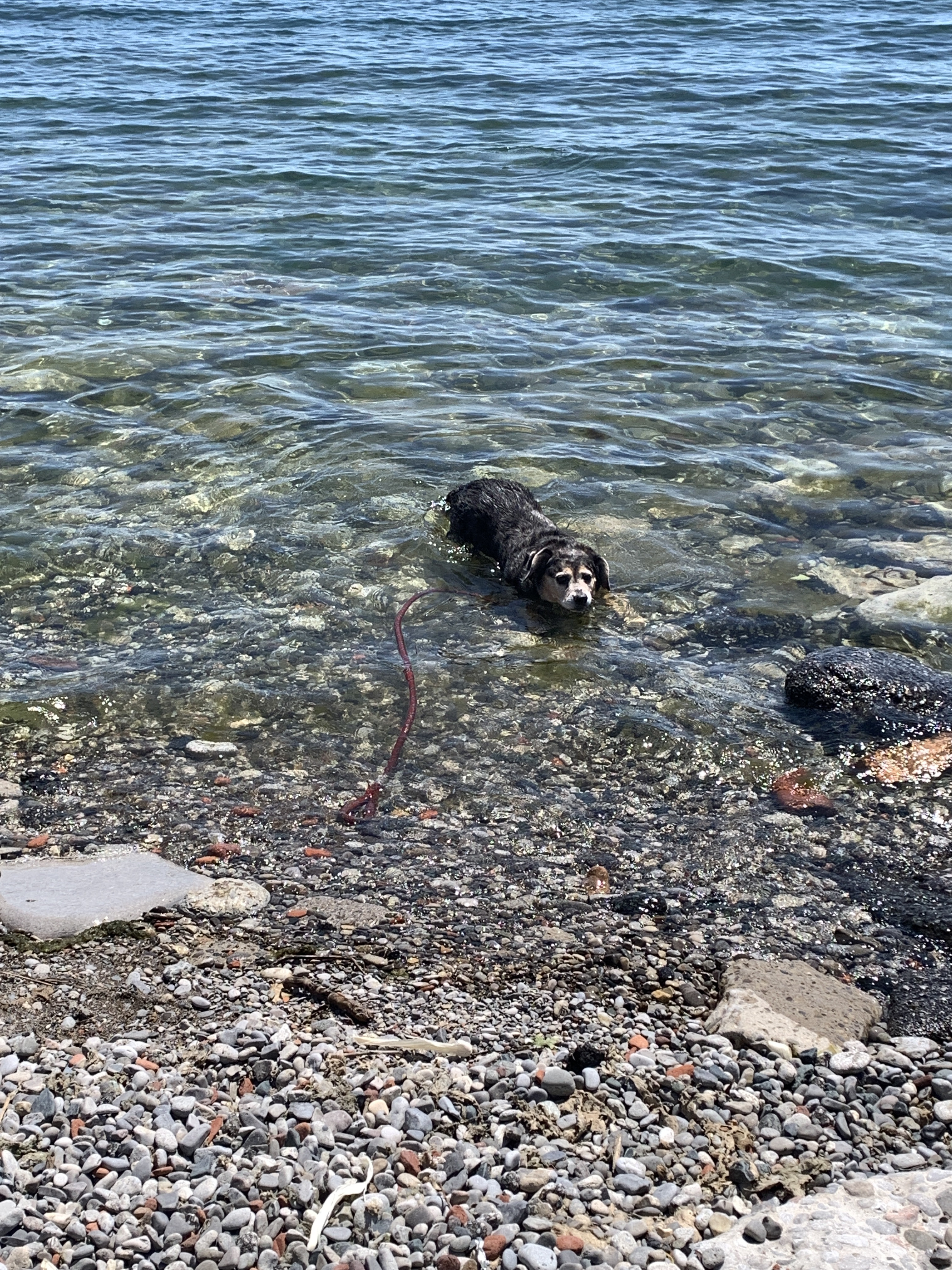 Growing vegetables in our backyard garden 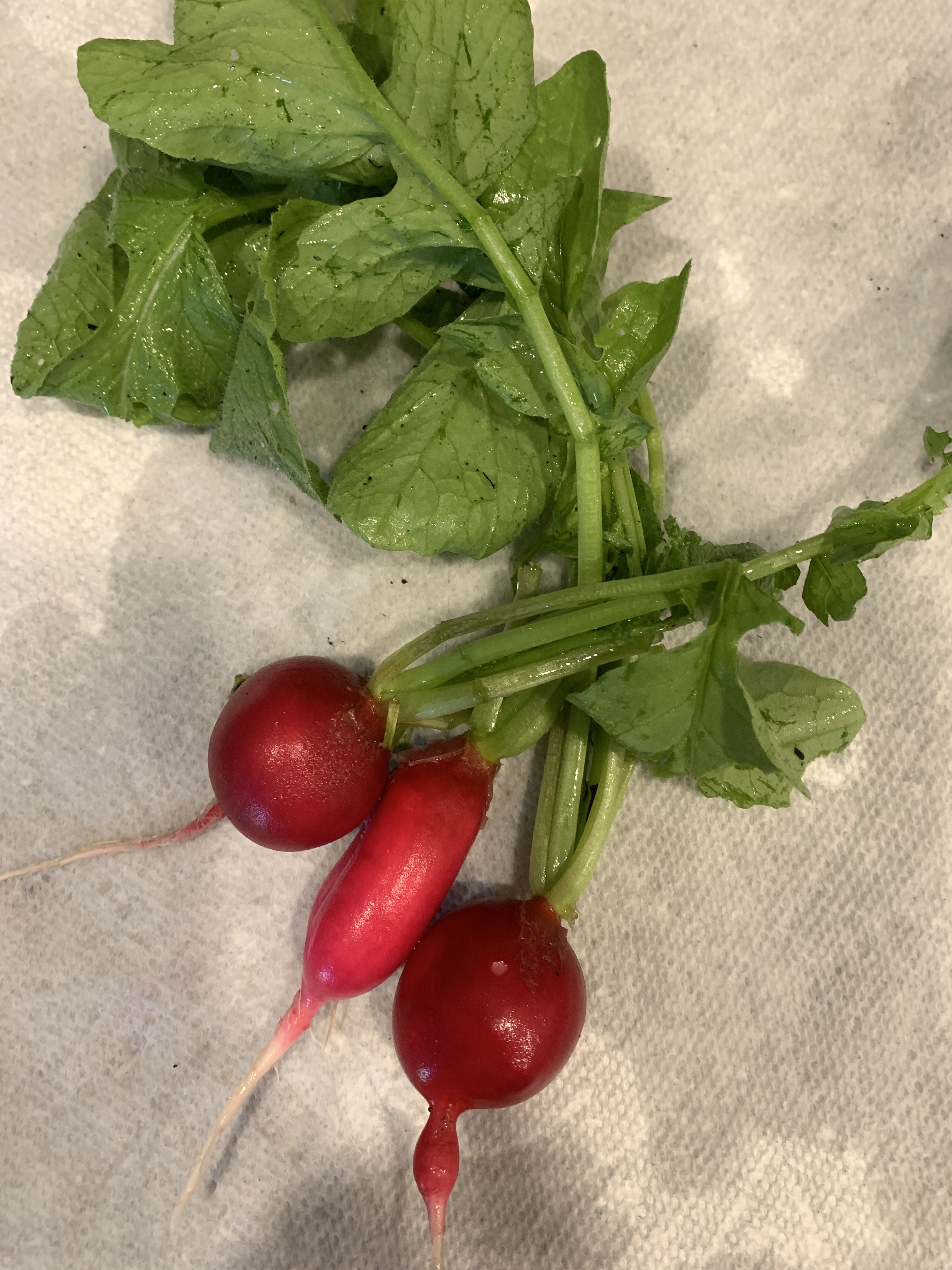 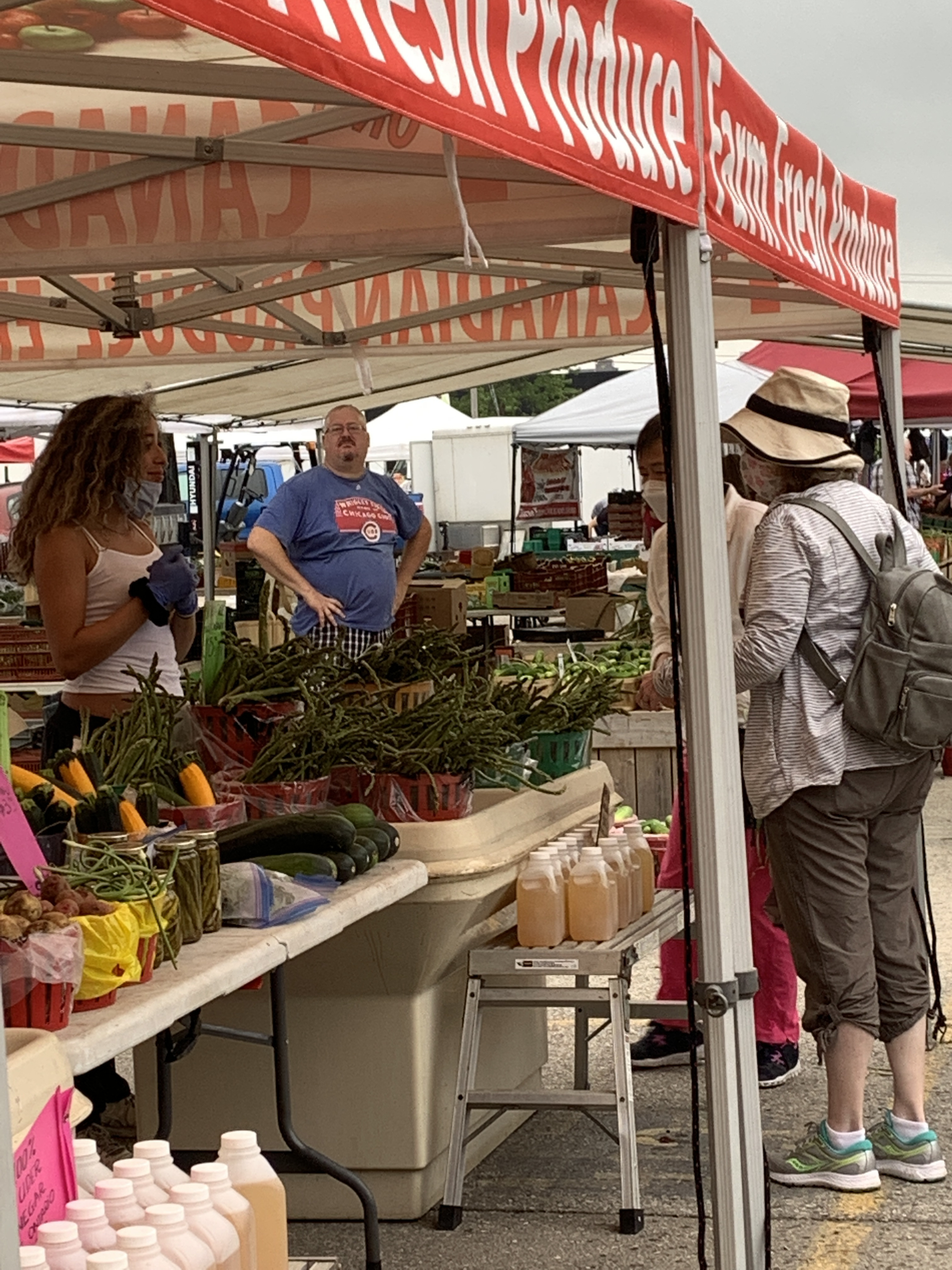 Enjoying a meal on the deck in the backyard. My plan was to drive to the cottage today to finally open it up but my husband made a deal with me and promised that we would go up together next week and stay for at least four days.

So instead of being stuck on the highway this long weekend I decided to attend the annual Canada Day BBQ at the Lawn Bowling Club. I’m glad I did. It’s a very short walk from my house to the club and as I got closer I could see that the place was already decked out in red and white. Canada Day is actually tomorrow but the club decided to host the festivities today. Even though I hadn’t signed up for the lunch because I thought I’d be away the organizers happily took my money and ensured me that there would be plenty of food. There were about 50 players today and we were divided into 16 teams of 3 players or more. The rules were a little different today and the four closest bowls to the jack were scored, 4,3,2 and 1.

I love this group because everyone is so friendly and supportive. It’s my year playing but I’m quickly learning names and picking up lots of good tips each time I play.

After everyone played we went inside and were treated to some delicious food. Hamburgers, sausages and hot dogs were cooked on the BBQ and the table was overflowing with salads, fruit, cheese and desserts, all donated by the members.

Tickets were sold for a 50/50 draw and Gail who sat with me had to leave early so I held onto her tickets. Didn’t she win the whole thing. It was fun shouting out that I held the winning ticket but I made sure everyone knew it wasn’t mine.

Before the festivities ended the top three scoring teams were announced and each member was given a small prize. My team came in third place and we each went home with $4.00.

The heat today was pretty oppressive for many of the members but we were all encouraged to stay hydrated and the occasional breeze off the lake brought some relief. To all my Canadian friends: