….thanks to Becky tor hosting Past Squares and ThrowBack Thursday https://beckybofwinchester.com/2021/10/21/past-squares-21/and to me for another Thursday Triohttps://mamacormier.com/2021/10/21/thursday-trios-gulls-and-stuffies/

My daughter posted this photo of her and her brother and sister from 38 years ago on our Family Page yesterday. It’s one of my favourite photos. Recently I put together a photo tribute for my Dad’s memorial and I came across this trio of my Dad, Mom and her sister, taken about 30 years ago.

In 2016, when my son came to visit us from London we took a trip to the Aga Khan Museum in the east end of Toronto. There were lots of beautiful Persian artifacts and many of them were circular so this post features two themes from past squares.

All the wacky birds, Monday Monsters and even Tonguely got into the act to wish Winnie a happy day. 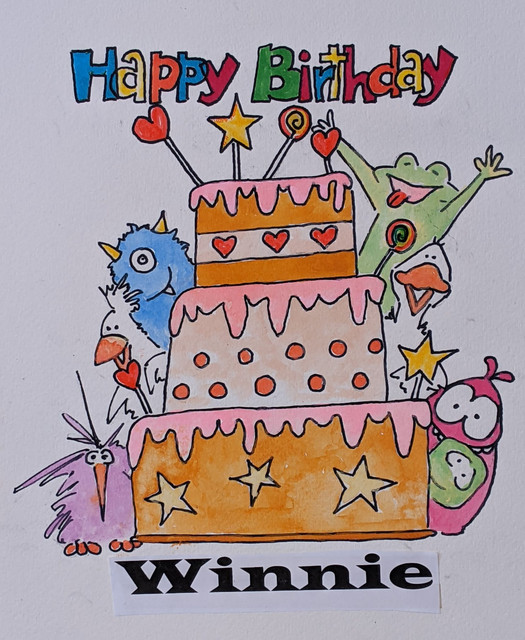 ….a sore shin but I saved my phone

On Monday, my daughter, Andrea and I drove up to Christian Island to close the cottage for the winter. I didn’t hold up much hope for good weather because the forecast called for rain. As we drove up in the afternoon we drove through some pretty heavy rainfall but the closer we got to the island the rain stopped and the sun came out. It ended up being a beautiful day.

Before starting to empty the shelves and put away the bedding we decided to take one last walk on the beach. There were all of six people on the entire beach and one brave soul in the water.

The east end of the beach is all rocks and boulders. I was wearing flip flops and just as my daughter said it would probably be best to walk in bare feet I slipped, lost my balance and went down on my side. I landed on the shin that I had hurt earlier in the summer when I slipped on our wet deck and slammed my leg unto the edge of the stairs. It took weeks for that to heal. I was holding my phone at the time and all I could think of was not to let it go or let it hit the rocks. I saved the phone but not before bruising my shin, my left arm and my ego.

The worst part was trying to get up again because the beach isn’t flat and my legs were higher than the rest of my body. I was able to turn over but I was afraid of putting any weight on the shin. After a few embarrassing moments I figured out how to navigate my legs without too much discomfort and pushed myself back up.

While I was down I decided I might as well take a photo of the beach from this low angle because I would never get down that low again. The first shot is the spot where I slipped and the second one was taken when I was down.

After our walk we made dinner and decided to do most of the heavy lifting the next morning. It was cooler in the evening but when we went to bed we actually found it very warm and kicked off the extra blankets that we thought we might need.

The next morning we made coffee and oatmeal before we started to work. After a solid 4 hours of work we finally loaded the car, locked the doors and screwed a sheet of plywood over the door closest to the driveway. We brought the garbage and recycling to the bin at the top of our lane and drove into the village to catch the 1:00 ferry.

On the drive home we decided to treat ourselves to fish and chips from Perkey’s Trailer in Elmvale. Delicious!

….sculptures from the Sculpture Garden at the McMichael Gallery

Andrea petting the ears of this wolf sculpture.

Mary Anne Barkhouse (born 1961) and Michael Belmore (born 1971), lichen, 1998
In this work, the artists address issues of nature versus culture. The role of wolves in this setting is symbolic. They are positioned like silent sentinels.

The following sculptures are all part of the Sculpture Garden which was established in 2011. The nine sculptures, donated by well known Canadian artist Ivan Eyre, is part of the McMichael’s permanent collection. Eyre is perhaps best known for his large landscapes and mythological paintings.

Thanks to No Fixed Plans for hosting Sculpture Saturday https://nofixedplans55.blogspot.com/2021/09/sculpture-saturday_25.html

From the golden hour to yellow golds to autumn golds and even a touch of gold in a painting and my granddaughters gold sweater…..

…thanks to Cee for hosting this weeks Fun Foto Challenge

Cee has used Whitney Houston’s hit Greatest Love of All as inspiration for this week’s Fun Foto Challenge.https://ceenphotography.com/2021/09/14/cffc-coat-of-many-colors/

My greatest love of all has to be my children, my grandchildren and my husband.

Gaelan and her family left on September 3rd to drive from Sparrow Lake, ON to Moncton, New Brunswick where their first home awaited them. The trip itself was pretty uneventful but they enjoyed the scenery and eating in parking lots. On day three arrived safe and sound. The moving van arrived the next day but they had Winnie’s bed and a mattress delivered earlier in the week.

After checking out the new house the family took a 20 drive to the ocean where Winnie was in fine form.

On their first day in the new home Winnie lost another tooth. On Wednesday Winnie started her first day of school in a new school in grade one.

After a wonderful first day of meeting new kids Winnie came home and promptly fell off a bed and bit through her upper lip. Another first was the trip to the hospital where luckily it was determined that she wouldn’t need stitches, just a steri-strip.

Winnie returned to school on Thursday and had quite the story to tell her new classmates. A special thanks to Winnie’s parents for the wonderful photographs.

….one of my granddaughter’s favourite activities at the cottage

A weekend at the cottage wouldn’t be the same without a bonfire and roasting marshmallows, especially when there’s a five year old to entertain.