…thanks to Becky B for hosting Square Perspective

A hint of pink sky peaking through the trees. 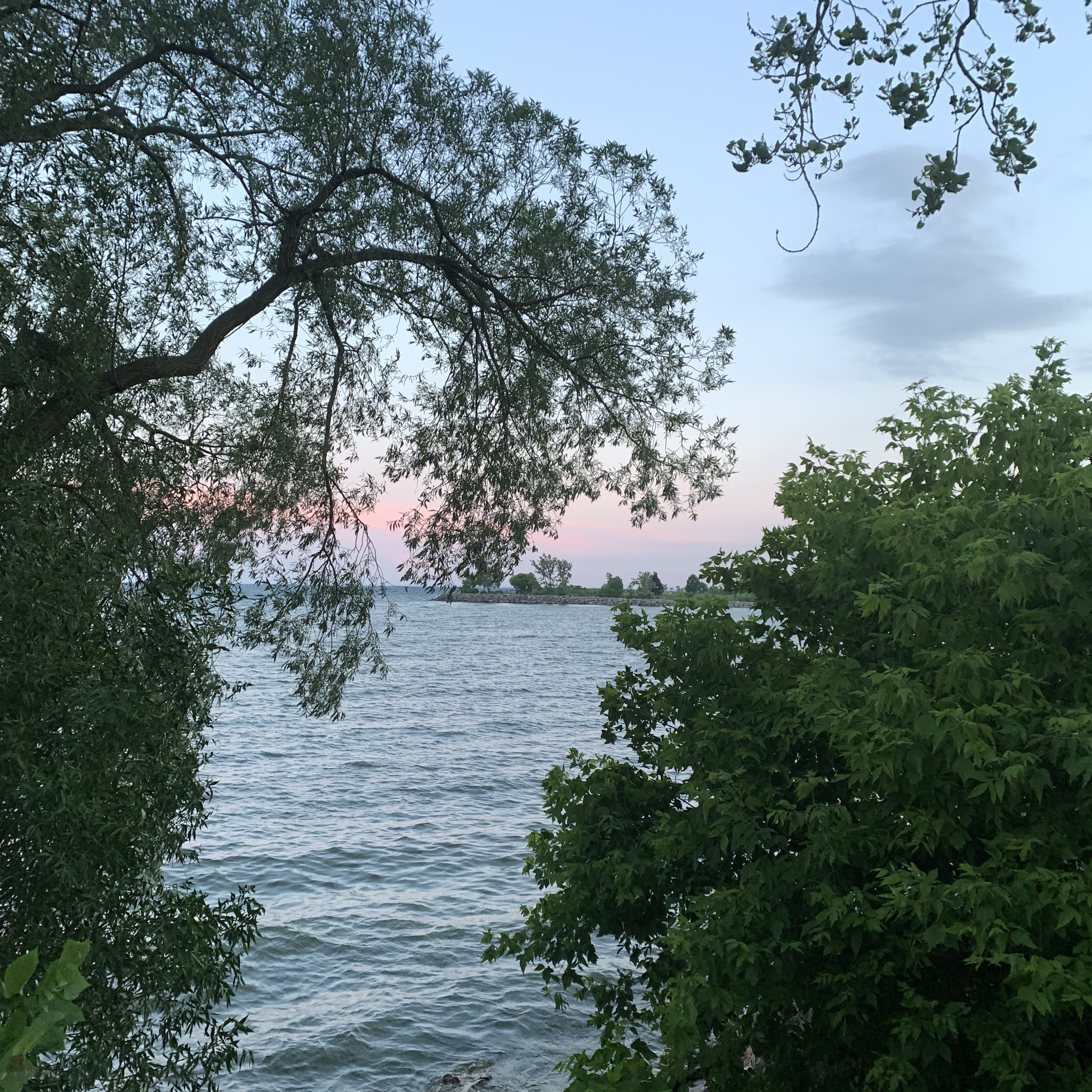 …thanks to Noah Scalin for this art activity

On day 8 Karen Abend featured Noah Scalin who showed us how to open up when you don’t know what to draw or paint. 100 dots is literally an activity where you randomly place 100 dots on a piece of paper and then you look for dots to connect to create a picture. I decided to look for a face. Here is my creation. 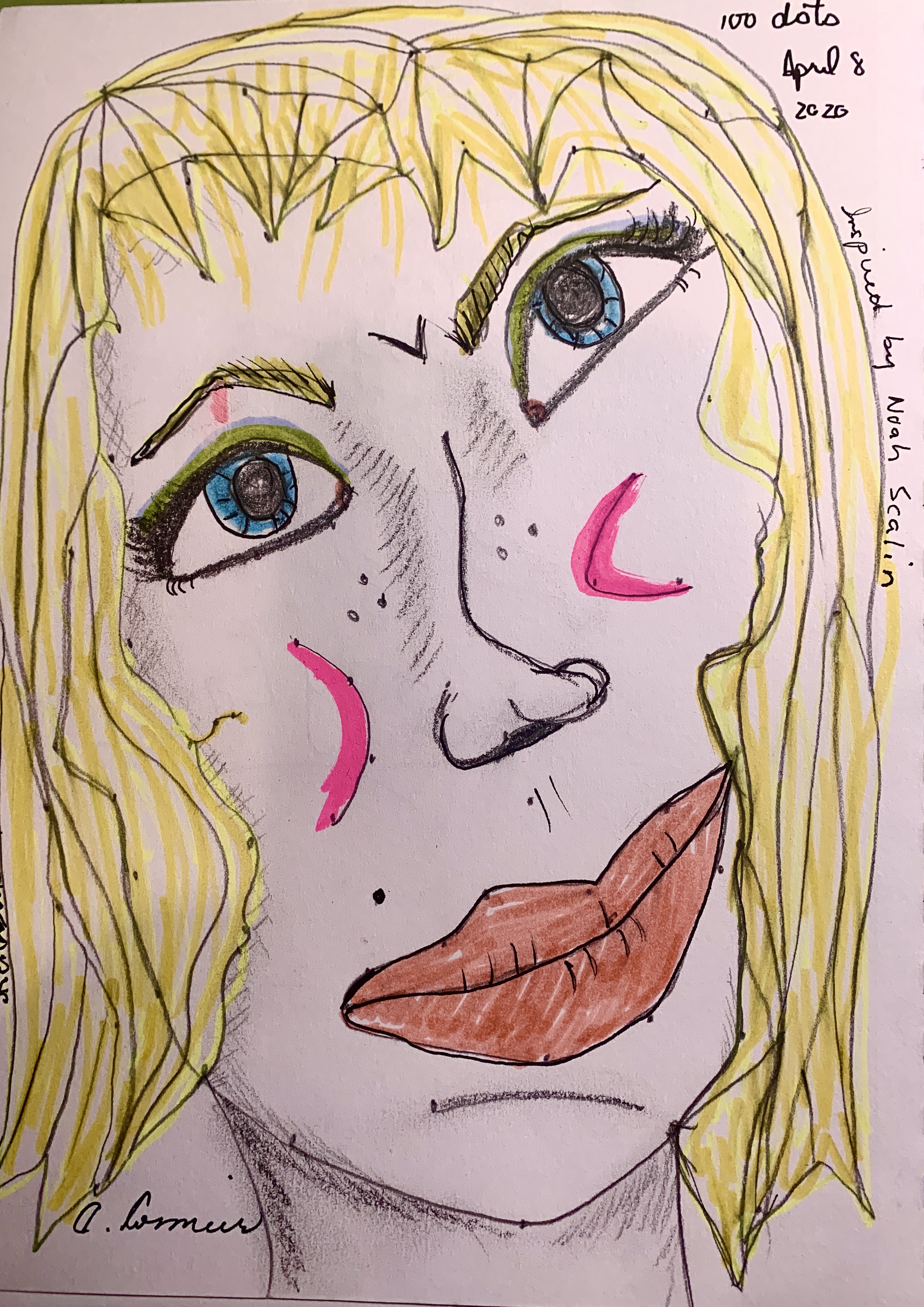 When I saw the theme for today I actually cringed because we’re in dire need of new living room furniture but we’ve decided not to purchase anything until our dear Frances is no longer with us. Thinking about it though I decided that it didn’t need to be something from the living room or something that we sit on.

This is probably my most favourite piece of furniture. Some of you might not consider it furniture but it plays a prominent role in the decor of my house. 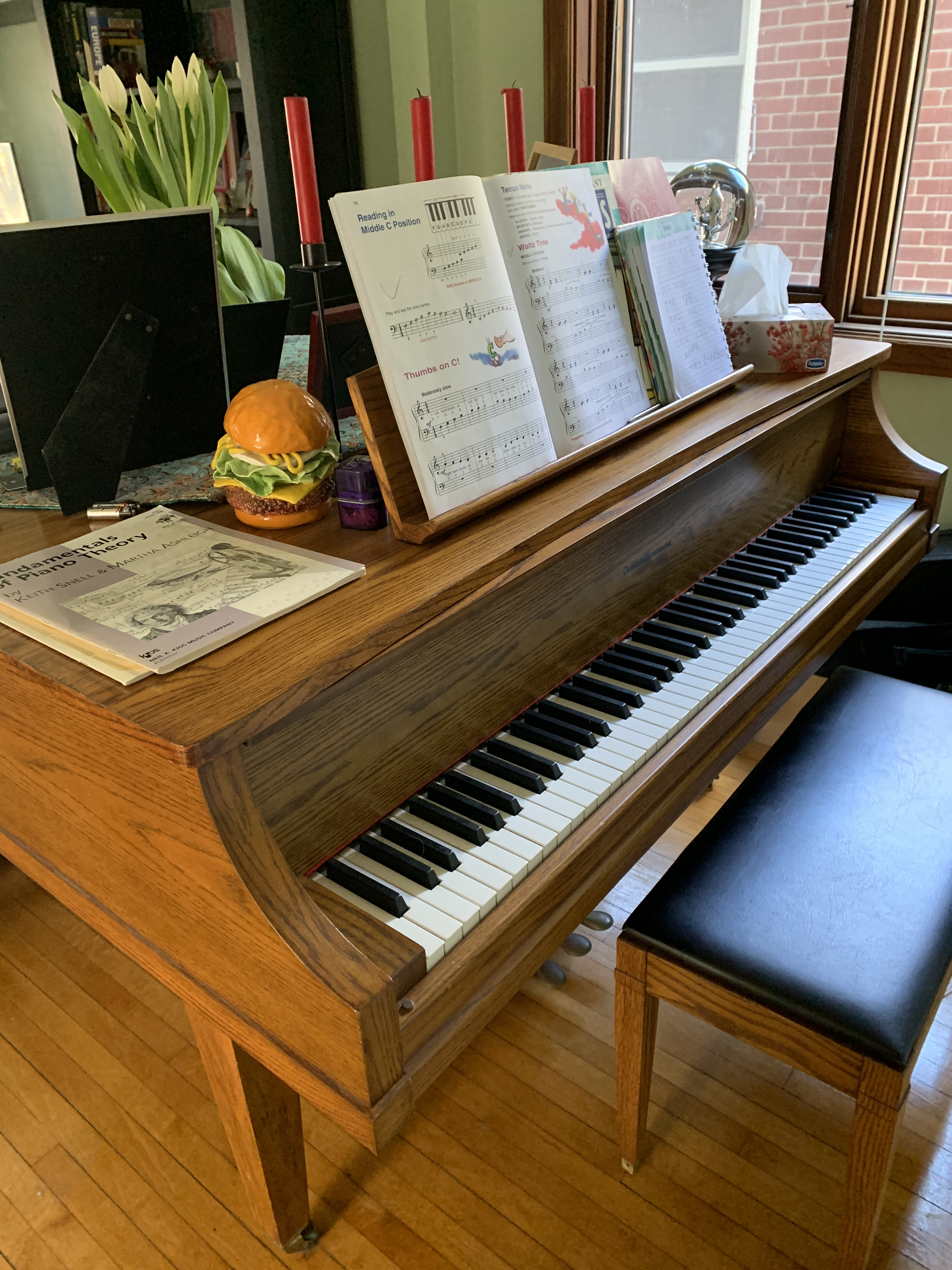 ….thanks to Granny Shot It  for hosting the Eleven Day Hallowe’en Challenge 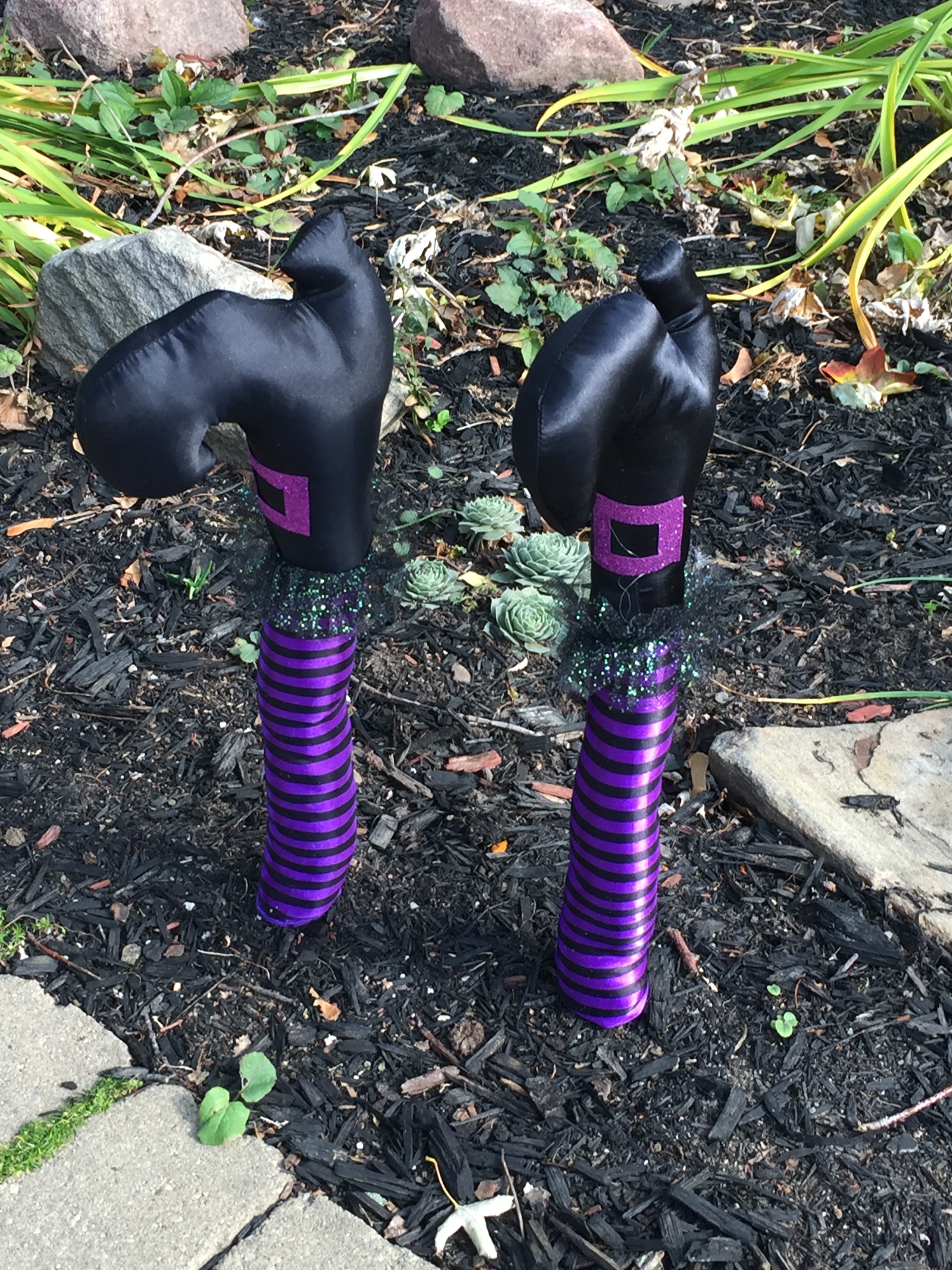 …..the weather that is

I’m not talking about the weather that we’re experiencing today but the weather that we had when we were in London, England back in October. Most people think of England as being foggy, cloudy and teaming with rain with a bit of sunshine here and there. Fortunately for us that was not the case. Out of the 14 days in London we only had one rainy day. That happened on Day 8.

Originally we planned to take the train to Brighton and enjoy the seaside. The relentless downpour that day changed our plans. Instead we took a bus to Brick Lane. Brick Lane is in the East End of London and is famous for its curry houses. Having said that I found it unusual that our son wanted us to try a deli where they serve salt beef sandwiches. I guess they’re pretty popular because there was a huge line-up to order one of these massive buns. The weather certainly didn’t keep people away. Unfortunately I didn’t take any photos of the area because the rain was really lashing down.

After sampling the salt beef we ventured back outside and maneuvered our way down the street with umbrellas overhead. We made our way to the Whitechapel Gallery to see the Elmgreen and Dragset show. It was to say the least, a most unusual show. On the ground floor gallery they present the ghost of the Whitechapel Pool. 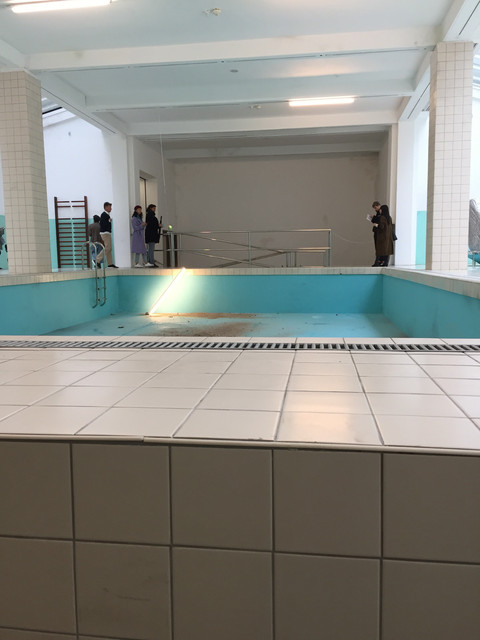 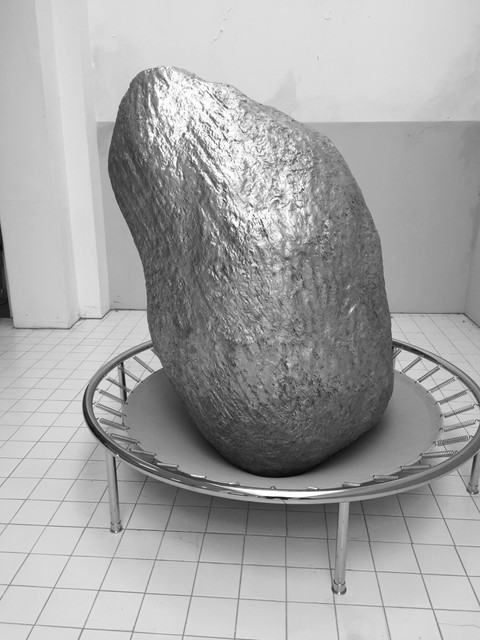 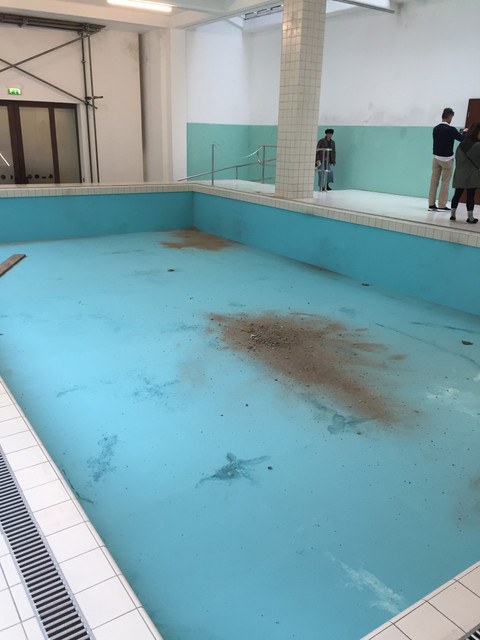 Throughout the exhibition there are more sculptures, such as, a cash machine, in front of which a baby has been abandoned. This supposedly acts as an emotional precursor to sculptures in the rest of the galleries. These include a rifle on the wall, a judge’s wig, a pregnant maid and a frightened schoolboy. 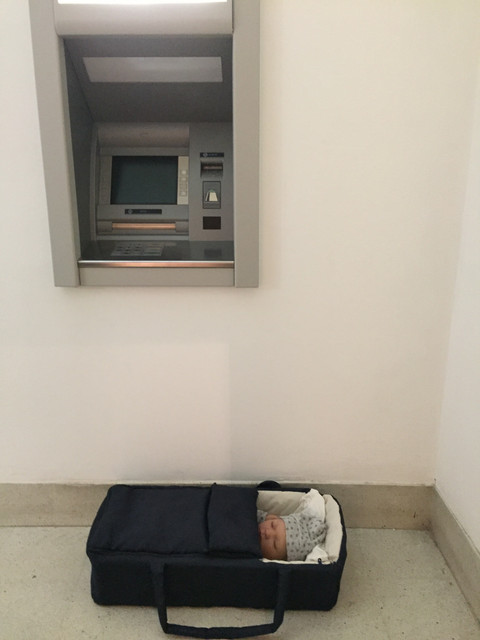 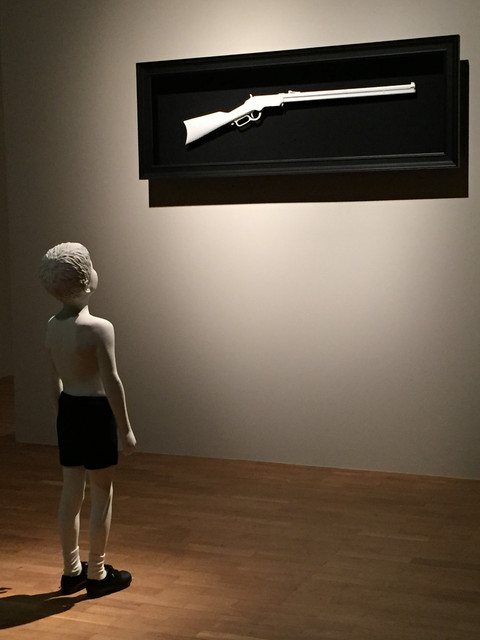 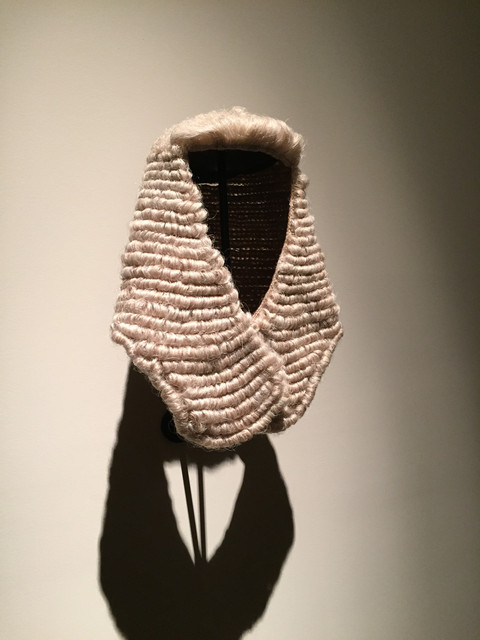 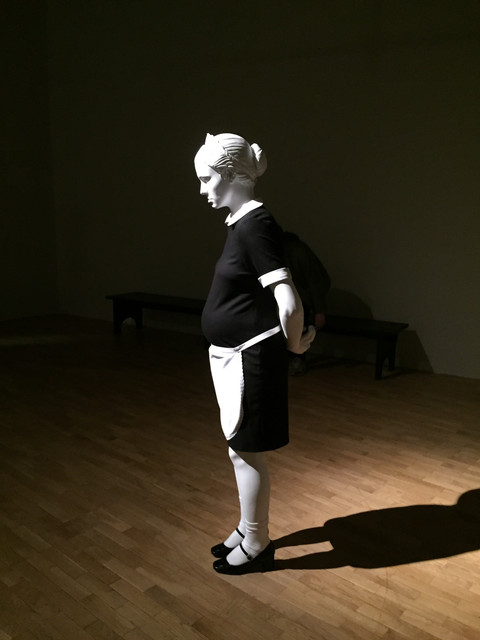 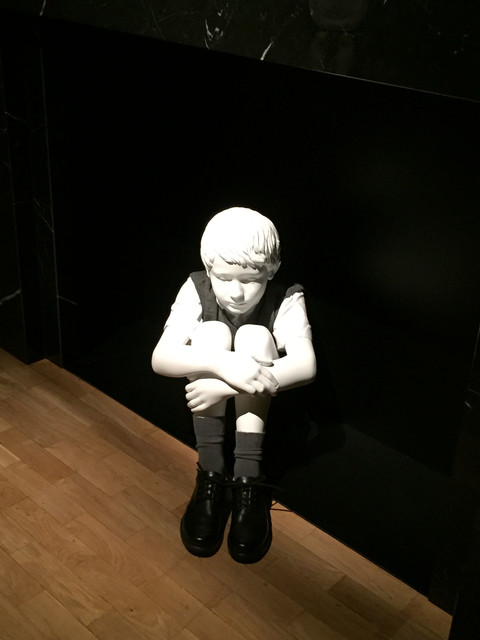 Later that evening, closer to our accommodations, we all went out for dinner together. It would be our last night together with all six of us. Andrea and Josie were heading for Scotland and my husband and I were moving to a hotel in South Kensington the following day. Our son picked his favourite Ramen restaurant, Kanada-Ya, Ramen Bar on Upper Street. 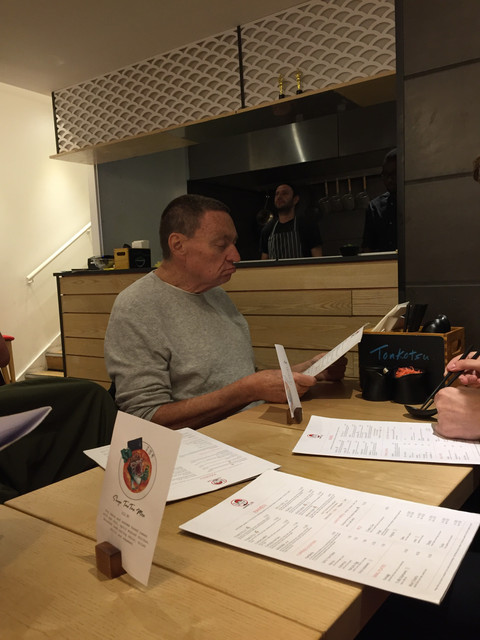 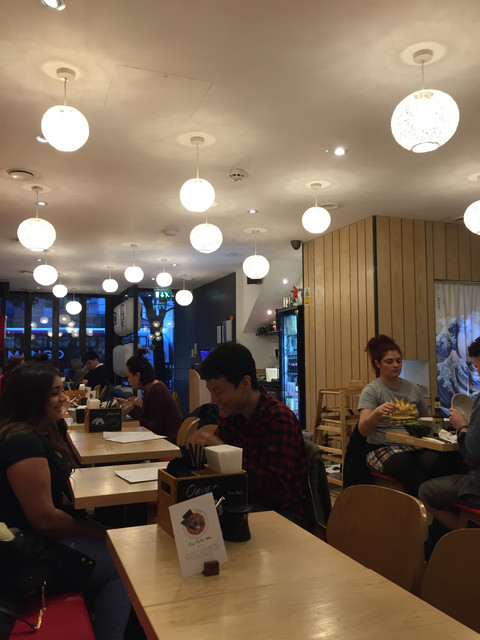 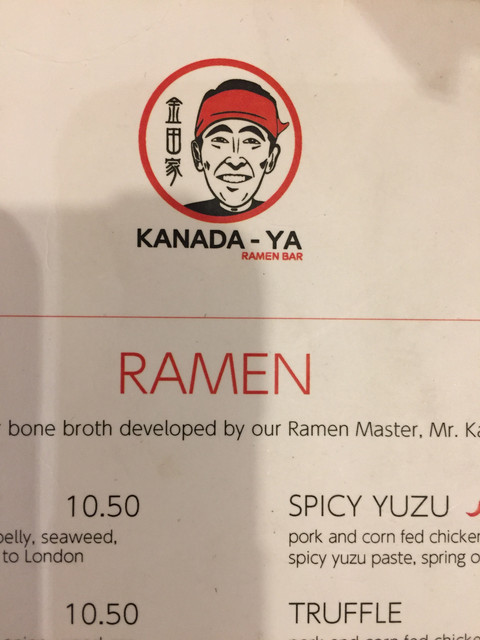 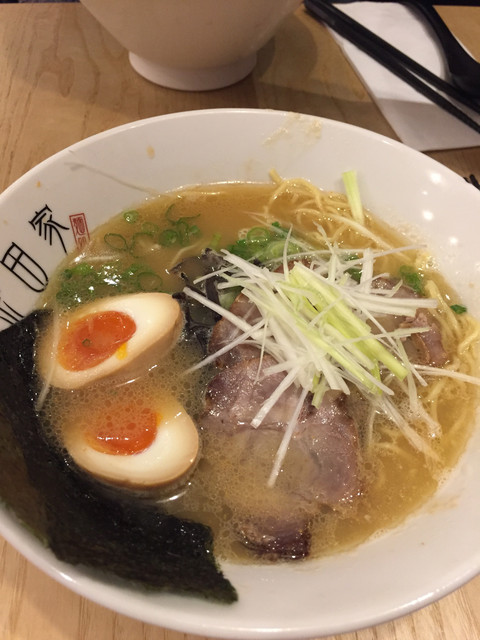 Not only did the good weather come to an end but so did our time with our daughter and daughter-in-law. Luckily for us the good weather did return for the rest of our trip but Andrea and Josie had quite different weather farther north in Scotland.

….day 8 of my year-long challenge

With this piece I tried to direct the thread to create a landscape. Tricky! I used acrylic inks again for the threading and watercolour to fill in the spaces. When you work on yupo paper you have little control over how the paint dries but then that’s one of the reasons why I like to work with it. This piece is also 9″ x 12″.

DAY 8: MAKE YOUR “ABOUT” PAGE IRRESISTIBLE

I have to admit that it’s been awhile since I’ve updated my About page. When I saw today’s assignment I thought “why not?’.

The first week back at school has been a tough one. Everyone is exhausted. It’s been extraordinarily long and I thought Friday would never come. Today I went out for recess duty when it wasn’t my turn. I simply forgot that I had a made a change with one of my colleagues weeks ago. I went back inside because I did have a scheduled duty later in the afternoon.

I started my day with a 7:45 basketball tryout session with 32 grade 4 and 5 boys and I ended the day staying late, trying to figure out how to open up the report card system so that teachers could start recording their marks and comments. Normally it’s a pretty straight forward procedure but we had a few changes in staff recently and we had to call the help desk for some assistance. Of course the help desk was very busy as well so there was some waiting on the phone before we could talk to someone. Our problem wasn’t as easy to resolve as one might think but after a half hour on the phone, some running back and forth and paging a few staff members most of the glitches were fixed and one last problem, we were assured, would be resolved by the morning.

I have to admit that I am extraordinarily tired today. After cleaning up after dinner I have no energy for any extra jobs today, although I did pack up one more box of Christmas stuff. I got a little bit of exercise on yard duty today. I don’t like just standing around so I walk for the full 15 minutes when I’m outside, especially when it’s cold.

Check out my ‘new and improved’ About page.