….thanks to Pull Up a Seat  for this fun photo challenge

From the Heathrow coffee shop in London to a cafe in Argentina (thanks to my son for the last photo) I submit my entry for the Pull up a Seat Photo Challenge. All these photos include family members except the two wax dummies in the last photo. Enjoy! 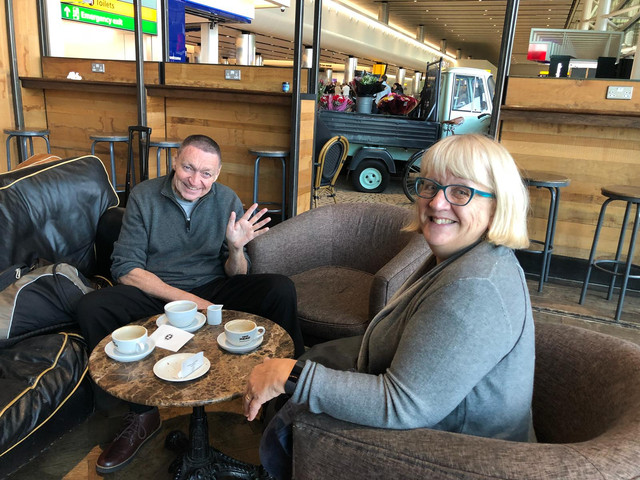 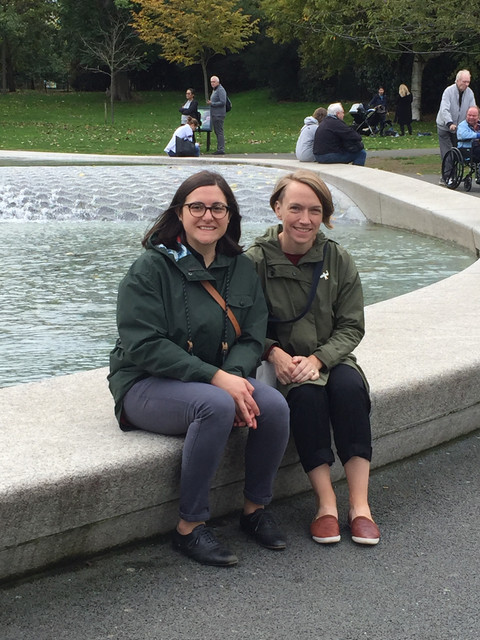 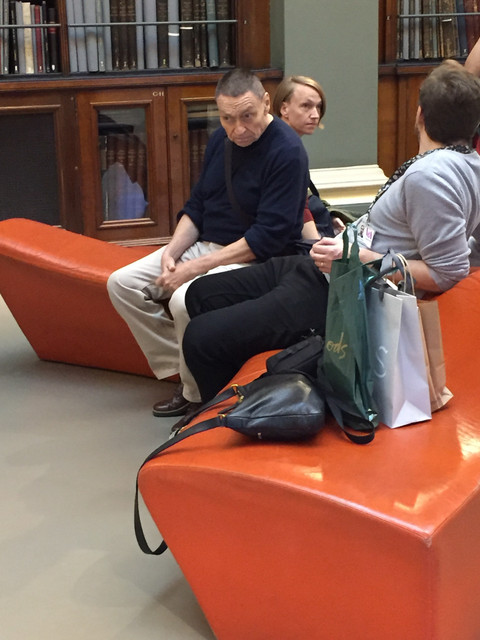 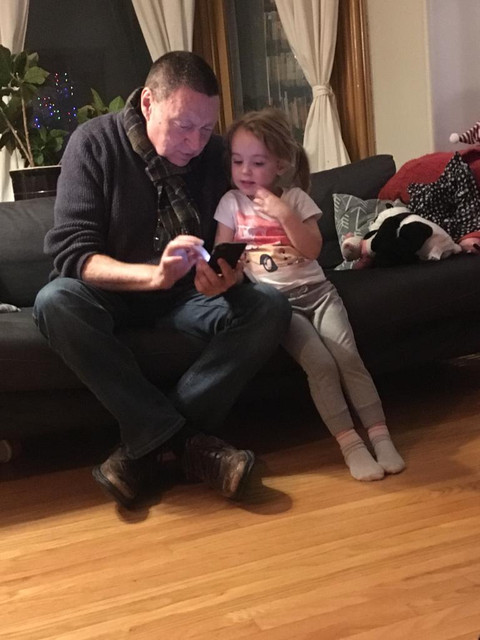 On Wednesday of this week I went on a little road trip with my husband to Collingwood. He had an appointment with a client and he invited me come along to keep him company on the two hour drive there and then home again. It was a beautiful day and the drive was easy.

As we got further north the countryside was almost magical. It looked like they had a dusting of fresh snow that coated all the trees and the snow itself was still pristine white. Luckily the roads had been cleared and driving was pretty uneventful.

Collingwood is very much a tourist town, with cottagers in the summer and skiing in the winter. The population is only about 18 000. The Main Street is where most of the shopping and restaurants are but I’m sure that somewhere in Collingwood there are malls and box stores and fast-food restaurants. I was happy to be dropped off on the Main Street while my husband drove to his appointment.

I spent most of my time browsing through the stores, checking out the art gallery, photographing the store fronts and enjoying a coffee at one of the local coffee shops. The downtown area has been designated provincially as a historic site and many of the storefronts have maintained it’s original architectural features. Two of the older buildings house the municipal offices and federal government offices.

Many of the stores still had some Christmas decorations in the windows and on the sidewalk. I loved the art on the exterior walls and I can imagine that in the summer when the trees are adorned with their leaves that walking along here is very pleasant.

I met my husband in a lovely coffee shop called the Espresso Post. While I waited I enjoyed a flat white and sketched in my drawing book. I loved the feel of the place with it’s heavy sturdy tables and chairs and high ceilings. When my husband arrived he also ordered a flat white and then we walked down the street to a restaurant called Sol Kitchen. It was recommended to me by the ladies who owned the art gallery called Butter Art Gallery. It was a great recommendation. The food was excellent and there was art on all the walls from local painters. My kind of place.

…..retirement is close at hand

I don’t normally count down the days to the end of the school year but this year is different. I’m finally retiring from teaching after 35 years of service.

I know some teachers who when they know they are retiring start the  count down from the first day of school in September. This is not my style but as my last day approaches I’m starting to feel that my life is about to change. I’ve written three speeches for three different retirement parties that all took place in the space of one week. The first one was for my principal and good friend, M, the second one for my longtime friend, L and the third was for me.

M’s party was held at her favourite restaurant. The meal was excellent and the speeches were warm and personal. M’s family was there and both her youngest sister and her niece spoke. They were funny and touching at the same time. L and I gave our speech in the form of a report card, which the staff thoroughly enjoyed because it was a bit of a roast but in the end the message was more serious. When M spoke she talked about how and why she came to be a principal.

L really wanted her father to be able to attend her retirement party and for that reason she booked the ‘party’ room at the nursing home. There was a piano player who played the entire evening in very comfortable surroundings. There were couches and overstuffed chairs situated around the room where people could sit and talk and listen to the speeches. Friends manned the wine table and servers walked about the room with canapés. The highlight of the evening took place when L and her father sang together and at the end of the evening L sang a solo. Three former principals came to the party plus family, friends and colleagues from school. It was a very musical evening and the accolades about her teaching career, especially those about her choirs, were very fitting for a much loved music teacher.

My party was the last one, held on Wednesday of this week. It took place in a restaurant literally up the street from where I live. My husband and I had eaten there on a couple of occasions and thoroughly enjoyed the food. My family, including little Winnie, friends from years past who were now at other schools, retired friends, neighbourhood friends, life long friends and colleagues from school attended. I was especially honoured when my very first principal from 1976-79 arrived with his wife. I wanted the party to be casual and fun. The finger food was amazing, the aperol spritzes refreshing and the cake and desserts delicious. My friend P, was the MC for the evening and he kept everyone laughing. Three of my friends used the Wizard of Oz as their theme for the speech they gave about my time with them at the school where we all met and worked at for eight to ten years. There were so many wonderful speeches that it would take too long to talk about each and everyone of them. I had the best time and will never forget the thought and care people put into planning my special day.

…..in both Italian cities we used Airbnb and VRBO

Venice was the only place where we stayed in a hotel. Travelling with a baby required special needs and many homes listed on Airbnb and VRBO met the criteria for our daughter, her 9 month old daughter and for us, the grandparents.

In Florence we stayed in a lovely apartment above a garage. It was a gated property and there were no neighbours above, below or next to us. There were two bedrooms, a small living room and kitchen, a bath with a shower and an outdoor terrace. The place was air-conditioned and had all the amenities that we needed, including Wifi, a washing machine, a crib and a television.

The location was ideal as well. We were just outside the ring that surrounds the city centre which is closed off to traffic. It was about a twenty minute walk to the leather market and the farmer’s market and just beyond that were all the museums, churches and tourist attractions that Florence is famous for. We were also within walking distance to a small grocery store, numerous caffes and restaurants and a couple of parks.

More about our accommodations in Rome in a future post.

What are you a “natural” at doing?

I think I’m a natural at teaching art to young children and reading stories to them.

Would you prefer a one floor house or multiple levels?

I like multiple levels in a house. I find climbing stairs helps keep me fit. Maybe as I get older I’ll prefer a one floor house.

What was your favorite subject in school?

Complete this sentence: If only the rain..

….would happen only at night.

What are you grateful for from last week and what do you look forward to this week?

I’m grateful for my daughter’s wonderful wedding a week ago today. It was a beautiful and simple ceremony at City Hall. Afterwards we walked to a very nice bar down the street and toasted the girls with Prosecco. Dinner wasn’t until 6:00 so we stayed at Drake 150 for about an hour and then we headed to Terroni’s for the reception. The guest list was very intimate with only 26 family members and very close friends in attendance. The food was fabulous and a wonderful time was had by all.

On Saturday I paid a visit to my friend Maria and brought her some goodies for her birthday, Valentine’s Day and Family Day. On Sunday my husband treated me to a very nice lunch at Snug Harbour in Port Credit to celebrate Valentine’s Day. The meal was fantastic.

This week I’m looking forward to pyjama day at school, the dance for the kids on Friday and hopefully seeing my granddaughter on the weekend.