We have been blessed with the most beautiful weather and the autumn colours are still with us. What a glorious combination. I’ve been walking in my sandals and short sleeve shirts and a lightweight jacket when the sun starts to go down. 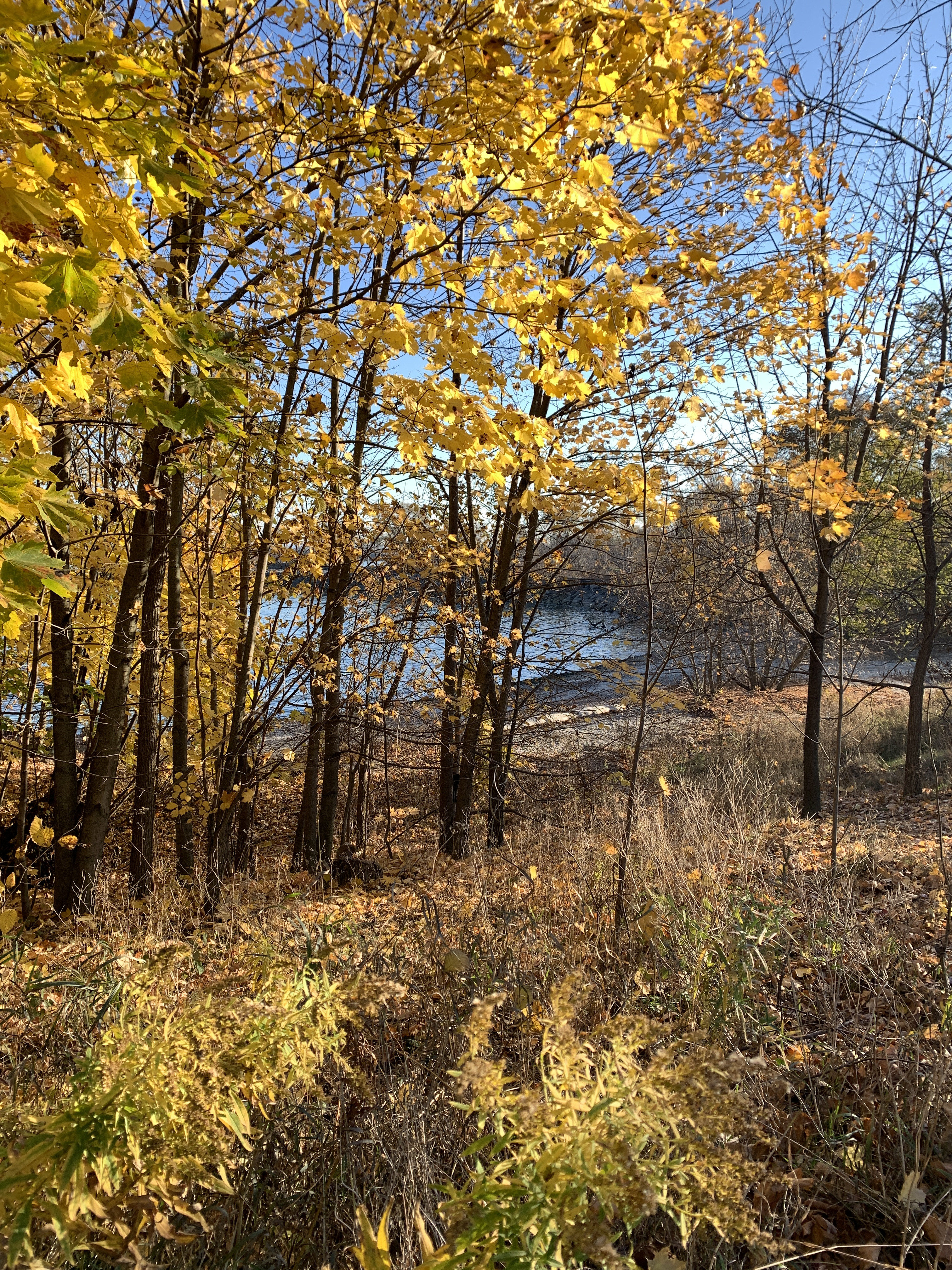 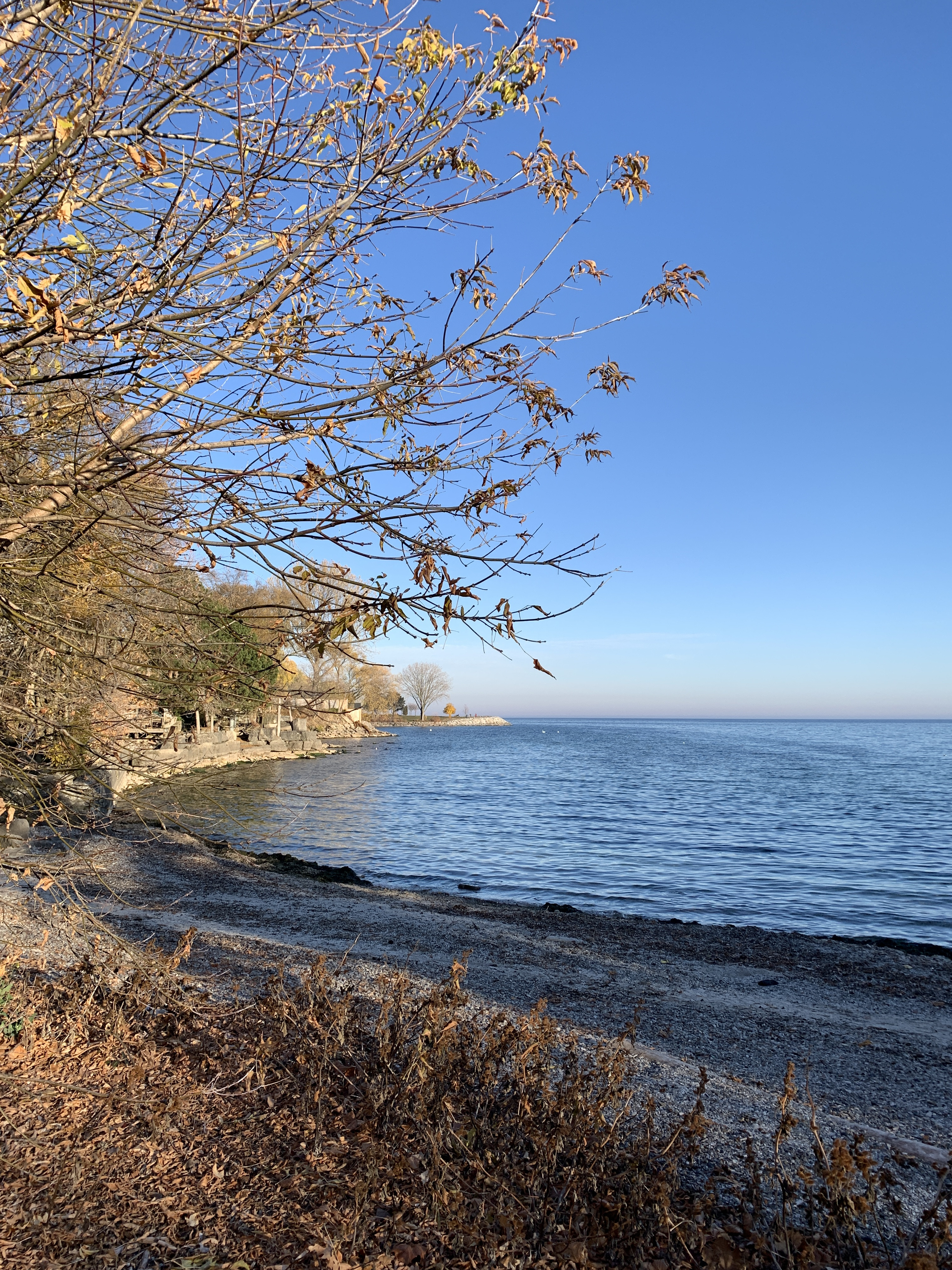 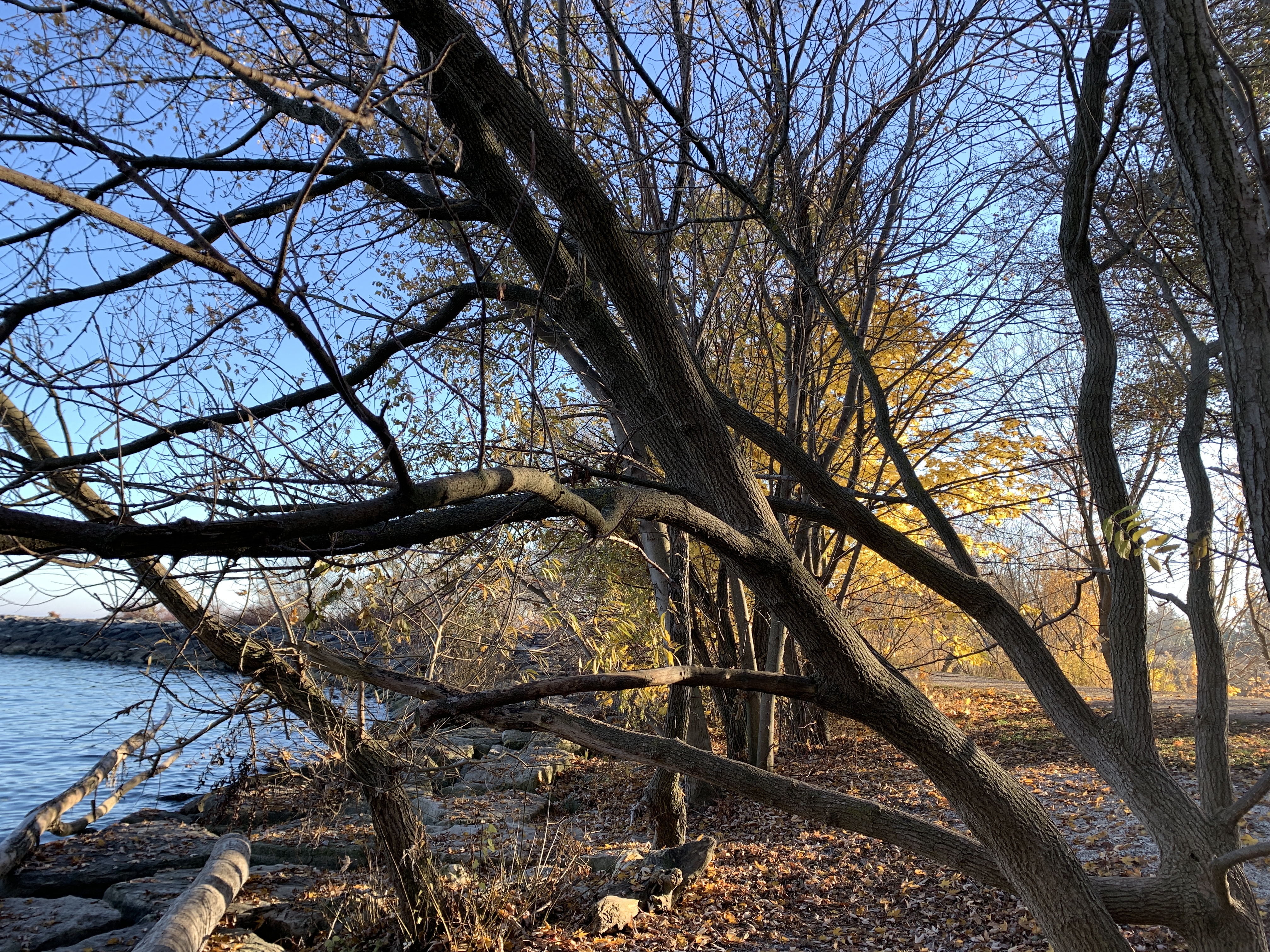 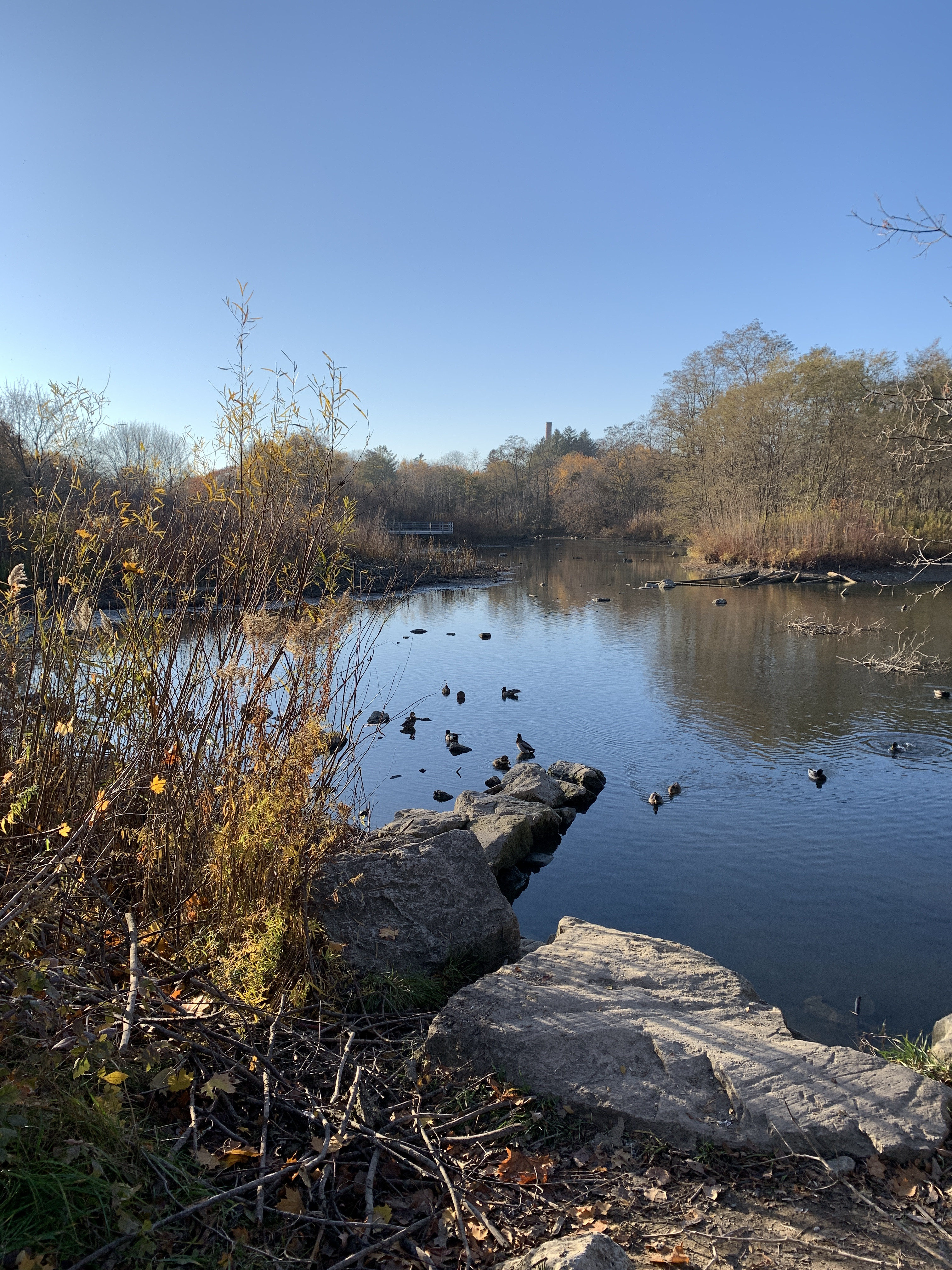 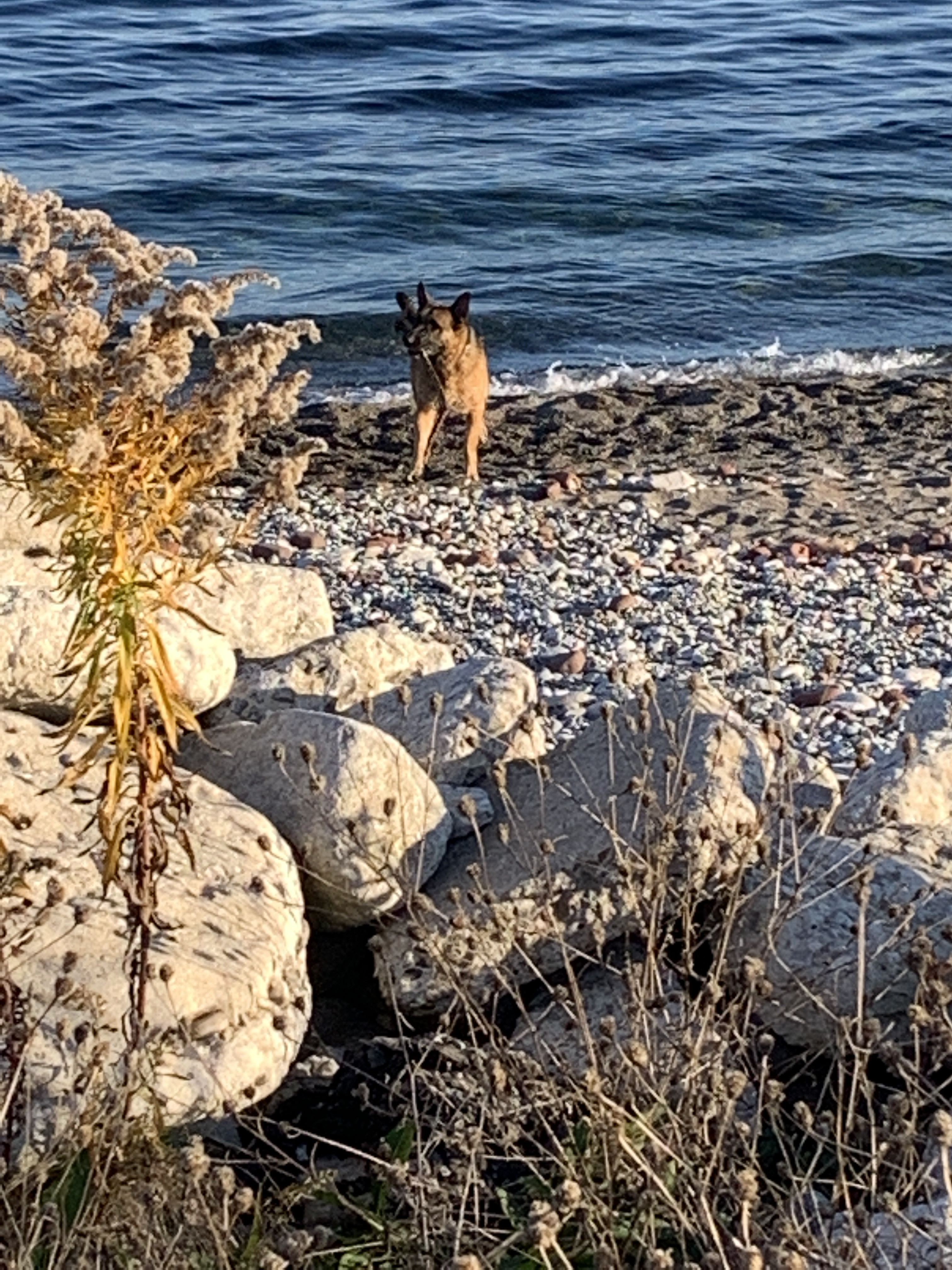 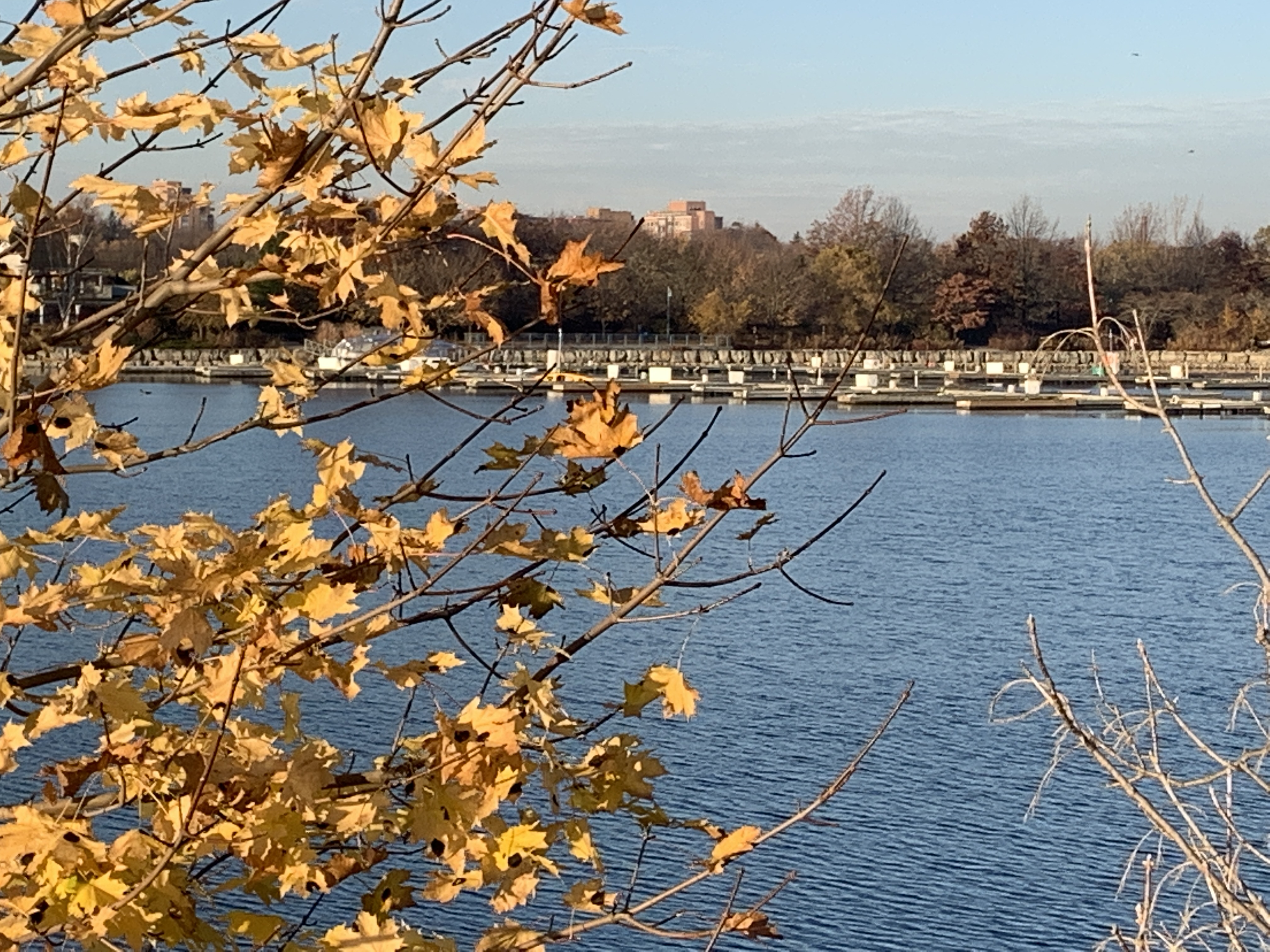 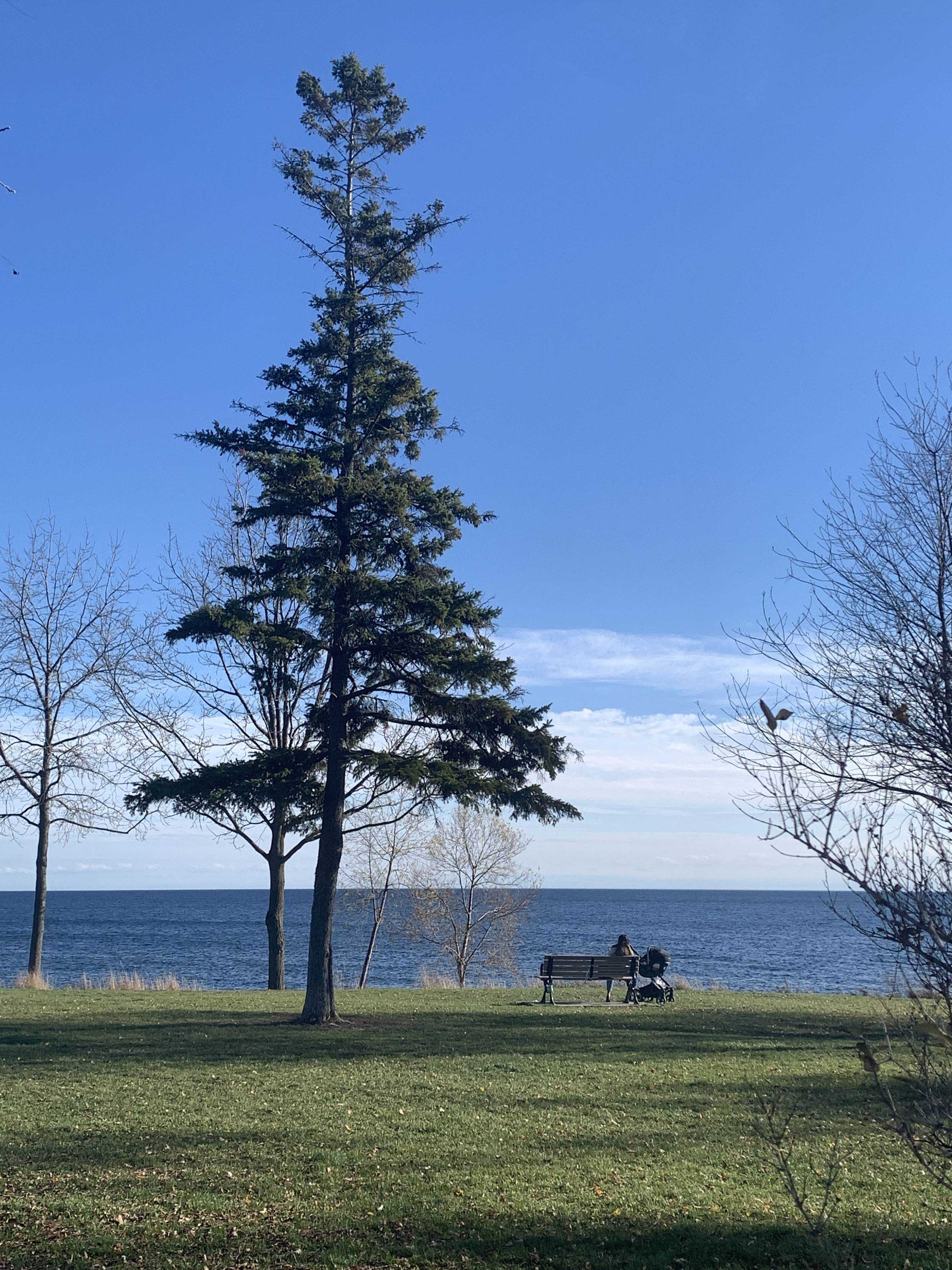 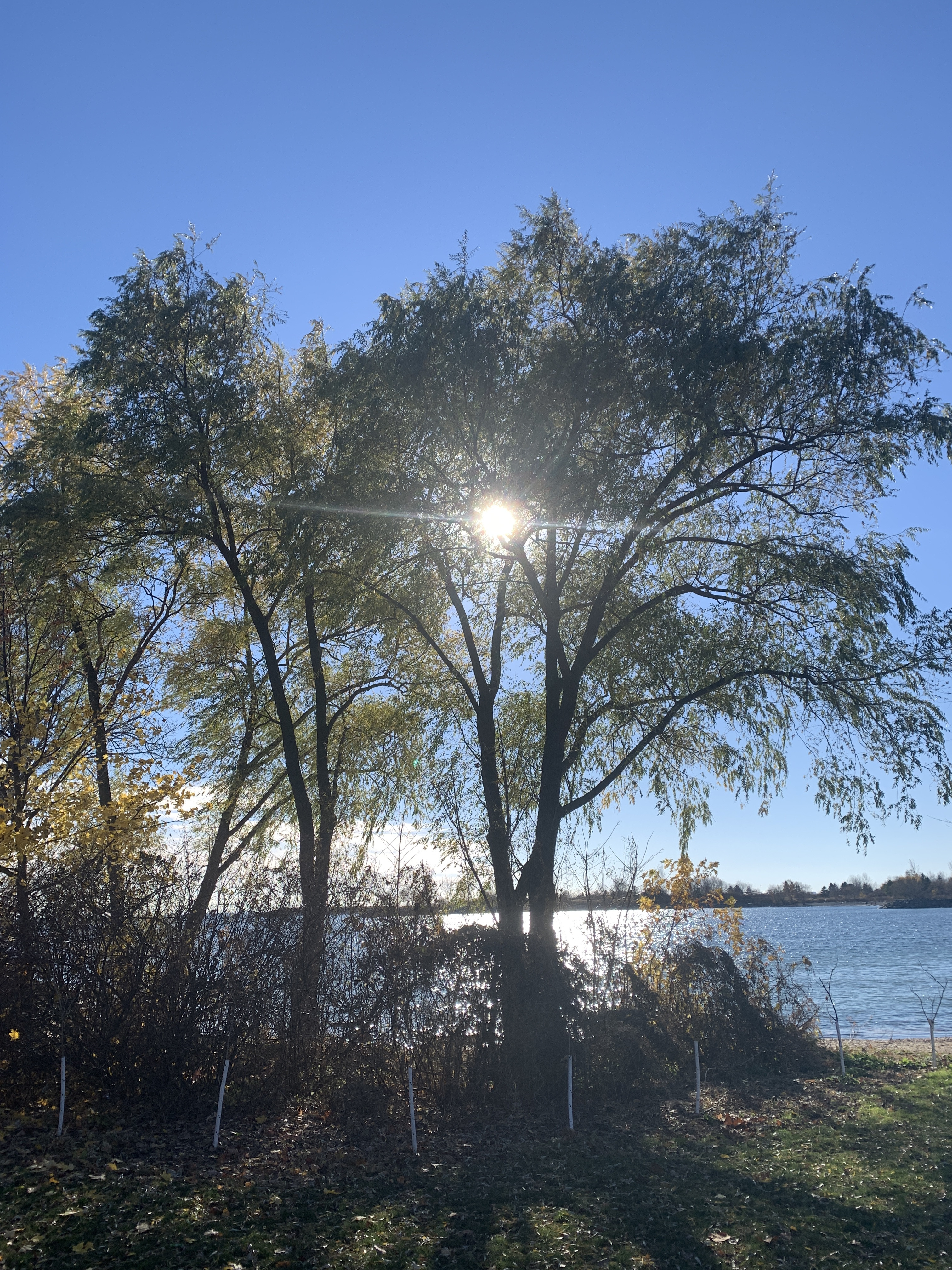 ….thanks to Wits End for the hosting Photography Inspirations for November ….what a glorious day!

For two days in a row, I’ve slept for a solid eight hours and I’ve reached my walking goal of 10,000 steps for seven consecutive days. Yay!

It is hard to believe that we’re half way into November. I dressed warmly for our daily walk this morning only to disrobe half way through our trek because I was too warm. I took off my scarf and gloves and opened up my jacket and the fleece I had on underneath it. Every day like this from here on in is a blessing.

When we got back from our walk we decided we could no longer stand the smell emanating from our little dog. I don’t know if she rolled in something or if it was a just a combination of swims in the lake and running through the fields that produced that rancid smell. None the less, we plopped her into the tub and scrubbed her down with doggy shampoo and warm water. After a couple of rinses we dried her off with some old towels. She didn’t particularly like the experience but she smells so much better. She even feels nicer to pet. We also threw out her old bed and I went out and bought her a new one. The old one was beyond washing again.

Our entire family has an app called WhatsApp. It’s very inexpensive to purchase (it was free and then went up to 99 cents) and we’ve never experienced any problems with it. What it does is allow us to text message and phone anywhere in the world, free of charge, to friends and family who also have the app. You can also put a group together so that everyone in the group gets the message at the same time.

Today our son in London texted all of us and informed us that the plans for his wedding were starting to move along and that Italy was back in the plan. He put some dates out there for all of us to mull over and it looks like there may be a wedding in July. I don’t want to jinx it so I’m not giving any more information than that. Now we just have to wait and see if the ‘farm’ apartments can be booked for the whole family and what day B and A choose for the actual wedding. Her family would also have to travel, so there’s a lot to consider in a rather short space of time but I’m glad that we’re not waiting another 18 months before this wedding takes place. I’m so excited!

Taken two year Christmases ago when they first got engaged.

It looks like this warm weather may stick around for a few more days. Wonderful!

….thank you Elizabeth for encouraging me to participate in this challenge

Through my photography I have discovered beauty in every season.

“Many people find November dark and depressing as gardens are put to bed and plants  wither and begin to decay. I see interesting shapes and colours and the seeds that will bring new life in the spring.” – Carol Cormier 2015

“If you truly love Nature, you will find beauty everywhere.”
– Vincent Van Gogh

Elizabeth from Tea and Paper invited me to join in this challenge. I was hesitant to do so because I’m not into quotes but I’ve always enjoyed reading other people’s thoughts. I truly believe in the beauty of nature so Van Gogh’s quote was perfect for me and I’ve finally expressed how I feel about the decline of the plant kingdom in November in my own quote.

The rules are for this challenge are as follows:

• Thank the blogger who nominated you
• Publish 3 quotes on 3 consecutive days on your blog. It can be your own, or              from a book, movie or from anyone who inspires you.
• Nominate 3 more bloggers to carry on this endeavor

My third nomination for this challenge is Jill from Jill’s Art Journal. Jill is a creative and fun loving artist. She loves to share her art experiences and encourages others to draw and paint. I love her humour and positive outlook on life.

I was invited by the talented photographer, Elizabeth, from Tea and Paper to participate in a “3 day quote challenge”. I was hesitant at first because I’m not one to recite quotes from memory but I did find that the internet has an abundance of quotes on practically any topic. Thank you for challenging me, Elizabeth!

Thank the blogger who nominated you.
Publish 3 quotes on 3 consecutive days on your blog. It can be your own, or from a book, movie or from anyone who inspires you.
Nominate 3 more bloggers to carry on this endeavour.

“Food is better in November than any other time of the year.”
― Cynthia Rylant, In November

My husband made this delicious roasted vegetable tart. He got the recipe from Ottolenghi’s cookbook, called Plenty. He’s made this recipe several times and even though there is a fair bit of prep work to roast the vegetables and caramelize the onions, it’s well worth the effort.

My first nomination for this challenge is Melissa over at Aran the Artisan. She is a young woman who originated from the U.S. and moved to Ireland where she married her sweetheart. Melissa and her husband live on the Aran Islands, raising their five beautiful children all the while learning how to use traditional and modern methods to live and forage off the land and the sea. Her blog is a must see.

….the month of November has been incredibly busy but very enjoyable for the most part

It seems that the number of cultural events that I get to experience are few and far between but lately I’ve been going to quite a few shows. As they say ‘when it rains it pours’.

The month started off, sadly with my aunt’s death and her memorial gathering six days later. On a h

appier note my daughter celebrated her birthday and  my son came home for a short visit from London all in the same week. I also attended a show called Between the Pages with a group of friends where we were treated to readings from the top five books that were short listed for the Scotiabank Giller Prize. All the authors were there and we listened to them answer questions that were given to them by the evening’s host, Carol Off.

In the following week we celebrated Remembrance Day at school on the 11th. It is always a big deal at our school and the children and staff prepared a very moving and memorable assembly for the community.

Two days later I attended an afternoon concert at the Edward Johnson building where the Dover String Quartet played to a full house. They were the winners of last year’s Banff Springs String Quartet competition. It was an amazing concert and received rave reviews from two newspaper critics.

The concert was sponsored and hosted by the Women’s Musical Club of Toronto.

A week later on the 20th, my husband and I saw the show, The Book of Mormon at the Princess of Wales Theatre. It was a very funny show. Just what the doctor ordered. We needed a good laugh after getting the news that my husband will need another surgery to remove the other half of his thyroid. They discovered that the nodules were cancerous. Apparently cancer of the thyroid is very slow growing and as his doctor put it, it’s not the illness that he’ll die from. None the less, the news was discouraging and the play helped alleviate some of his despair.

Two days later, our good friends, D and D called us and invited us to brunch at the restaurant, Frank, at the AGO. The art gallery was featuring works from Michelangelo and Rodin so after our meal we decided to take in the show. I have to admit that I found the Michelangelo pieces somewhat underwhelming. Many of the works were very small and people moved into the the pieces way too closely for my liking but I can understand why.

The Rodin pieces on the other hand were all sculptural and much larger. I enjoyed seeing the sculpture, The Thinker, up close and personal. It was also interesting to see how large Rodin made the extremities of his figures. The hands and feet of many pieces were massive.

On the 25th I received a phone call from my friend L and she informed me that our friend, C  had put her back out and couldn’t use her tickets for the ballet the next day. She offered them to us and so the next day we headed downtown, had dinner together and then went to the Four Seasons Centre for the Performing Arts to see the ballet, Nijinsky. It was an incredible performance. I was mesmerized by the slow motion action going on in the background and the shear physicality of the lead dancer’s movements. How that man isn’t black and blue all over is beyond me.

Finally on Friday, November 28th we were guests of our friends D and D at the University of Toronto production of Gilbert and Sullivan’s HMS Pinafore, It was charming and fun to watch.

As I said earlier ‘ when it rains, it pours’. So much to see and do. I’m exhausted just writing about it. Now that we’re into December I’m sure things will not slow down but for different reasons. November was truly a month for the arts.

….the contrast between the grey skies and remaining flora is stunning

As we prepared to go for our walk this morning we had no idea how beautiful a day it would be. The sun was shining and the temperature was warm. Here are a few of the sites we experienced on our walk.

I know that you may think posting a Tim Horton’s sign is odd but we’ve been waiting for months for this place to open. Being able to pick up a coffee on our early morning walks is a special treat, especially since this location is right in the middle of the college where we walk every day.

“Hurry up and finish that coffee, Carol!”

I pass this tree every day. Today was the first time I noticed what an unusual shape it has.