….waking up to grey skies

When I woke up the day didn’t look too promising, especially for getting out for a long walk. I quickly got dressed and headed out the door to get a few steps in before the rain started. I managed to complete a few chores in the backyard as well, like putting away the yard waste bags so they wouldn’t get drenched before garbage day, and cleaning out the wasp trap and filling the bird feeder. Here are a few photos I took on my short walk.

About mid-morning the rain started and I drove my husband to the clinic for his bi-monthly shot. On the way back we stopped at the store to replenish our milk, egg, fruit and cheese supplies. Once we got back home we made our first meal of the day.

The rain hasn’t amounted to much so far and it looks like it may have stopped for the day. I might be able to get out for another walk after all but in the meantime I have some paintings to finish. I’m starting to feel better about getting ready for my solo art show at the end of June. 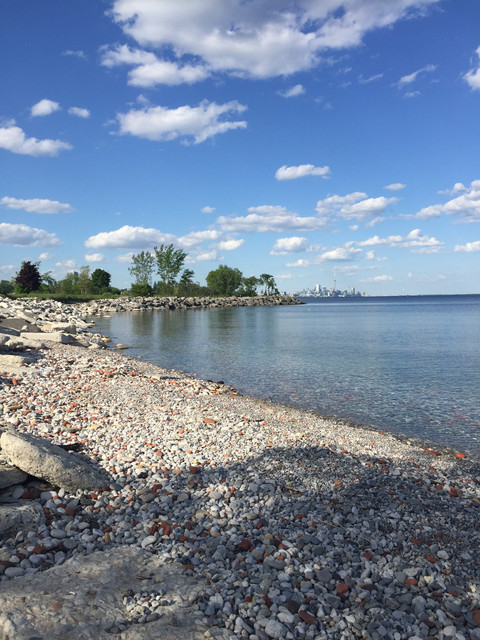 ….thanks to WordPress for this week’s photo challenge Place in the World

People assumed that I would move when I retired. That’s other peoples’ dreams, not mine. So often I hear people say they want to move to the country, get out of the city. I’ve known some people who have done that but moved back to the city within a few years. I live close to downtown Toronto but I’m right by Lake Ontario and I’m surrounded by parkland. If I want to go into the city to catch a show or go to museum or art gallery I’m only a 20 minute car drive away or a short trip on the subway. When I want to go hiking or biking I just have to step outside my door and get on the Waterfront Trail. I have the best of both worlds.

I’ve always loved living close to the water and I love my city, Toronto. …. this week’s WPC asks us to look for everyday beautiful objects or scenery

Everyday I walk to the this park at the end of my street and witness the city skyline. Each new day, every season and different times of the day brings something different to this extraordinary view.

…. and I reached my goal Saturday morning!

Some of the best times in life are those that are not planned and just happen as the day progresses.

The only thing that I had planned for the weekend was cleaning the house and getting some of my son’s belongings from the apartment he had shared with his girlfriend.

My husband and daughter number one, A, took care of the latter job while I started on the first. As it turned out retrieving my son’s belongings didn’t take long at all and my daughter called to arrange for me to meet her and my husband for breakfast.

As I was driving to the designated location for nourishment, A called me and asked if I would pick up her partner, J from the house so that she could join us for breakfast. The four of us ended up having a delicious meal in a very funky and popular yet unpretensious location.

I announced to my family that I had reached my goal that morning and my husband joked about celebrating by eating whatever I wanted. I wasn’t tempted. I ordered an omelet with cheese and herbs, a small side salad and a delicious cup of Americano. No potatoes, no toast.

As we were sitting in the booth (comfortably by the way even though it was pretty small) we talked about the large bag of pears my husband received from one of his clients. He wanted to make pear butter and put it in jars (there were so many pears).

The discussion soon turned to how we could all get involved and maybe we could pick up some tomatoes and make sauce as well. Hmmm….we had no idea how time consuming this would be.

The girls and I headed for the hardware store to pick up more jars, a food grinder and a propane burner to cook the sauce outside. We couldn’t find everything we needed in the first store so we decided to drive to a famous Italian store on St. Claire that catered to the Italian community, specializing in kitchen supplies. They had everything we needed except the jars and the pots were pretty expensive so we decided to continue our quest and we headed west. So far we had only purchased the food grinder.

After numerous discussions back and forth on our phones with K we decided to buy the propane burner at Canadian Tire where they were on sale. This particular model included the pot. Actually it was advertised as a turkey deep fryer. Guess how we’re preparing our turkey this Thanksgiving.

Unfortunately the first store had sold out but the Canadian Tire close to the house had 9 of them in stock. Back in the car. We made a couple of detours and stopped in a small cheese store where they make their own fresh ricotta everyday. What a treat! It was so fresh that it was still warm. The second detour was another cheese store. Have I ever told you that I love cheese.

We finally had all the supplies we needed for making the pear butter. In the meantime K picked up a bushel of plum tomatoes (another project for another day).

It was mid afternoon before we actually started making the pear butter. Turns out I had to make another trip to buy star anise, lemons and fresh ginger. It took us about 4 hours to cut up the pears, cook them, grind them and then cook them some more.

The actual cooking time for the butter to reduce was about 2 hours. As it cooked the sauce  went from this light yellow to an amber and after processing it in jars it turned a pink colour.

For the recipe go to:

The final product. Delicious on ricotta cheese and toast.

After supper we were ready to put the pear butter into jars. We got the water bath ready and K volunteered to watch the last step so that the girls and I could go for a long walk with Frances. The rain that was forecast for the day was over by the afternoon and the wind blew the clouds over the city and to the east. An interesting sky.

The girls and I walked for about 45 minutes. We passed a house where the owner was selling fresh vegetables from his driveway and A and J bought a bag full of corn, potatoes and cheddar cauliflower. When we got home the girls packed up their goodies, including jars of pear butter and I drove them home.

The best part of the day was spending it with my husband, my daughter and her partner. None of this had been preplanned. It was an adventure and even though it was a lot of work it was very rewarding. What about those tomatoes you ask? Well that’s another story for tomorrow.