….I was dreading going to the cottage on my own to open up for the season

Before we left for Italy I was hoping to open the cottage so that it would be ready when we returned. Unfortunately that didn’t happen for too many reasons to go into to.

When we did return home from our amazing trip it took me a couple of days to recover from jet lag. My husband was still recovering from his gastrointestinal problems so a couple of days were spent visiting his doctor and then a specialist. One thing was for sure;  going to the cottage meant going on my own. My husband didn’t feel well enough to be at the cottage, my daughters couldn’t make it until later in August and my friends were busy with elderly parents and health issues of their own.

Last Sunday I finally packed up the car and made the trip on my own. Leaving on a Sunday meant I missed all the weekend traffic and the line-up for the ferry (barge) was short. One of the other reasons I was hesitant about going up alone was because the regular car ferry had been taken off the lake forever and a temporary barge was transporting eight to twelve cars at a time (normally 20 cars were on the old ferry). The fear of the unknown kept me in the city longer than I had planned.

Everything went fairly smoothly crossing the lake. When I got to the cottage my neighbour’s adult children had already removed the plywood panel from the back door and had moved my propane fridge from inside to the deck outside. It was evident that the mice had moved in last fall after we left or early in the spring. It’s been worse. I quickly cleaned up the mouse poop in the kitchen and removed all the cushions from their protective storage bags.

Every day that I was there I tackled a new job or two. This way I didn’t kill myself trying to do it all in one day. After four days I had wiped down all the surfaces, washed most of the dishes I would need, swept and washed the floors on the main level and opened up the sofa bed to make sure nothing was living inside. Outside I raked the leaves from the pathways, swept the deck and set up the outdoor furniture and the barbecue.

While I was there I had some fun as well. I visited with my good friends next door, celebrated a birthday down the way with cake and a bonfire, learned a new board game, went for walks on the beach and actually swam in the lake, two days in a row when the water was calm. I was able to get some reading done and finished a novel I had started earlier in the year. I’m now on a second book that I hadn’t finished from a couple of months ago.

On Thursday when I left I luckily got the last spot on the barge for my car and had a leisurely drive back to the city. It felt good knowing that the cottage was somewhat visitor ready and that next time the trip would be less stressful.

The other fun thing that I found time for was taking photos that I will share with you over the next few days. You may have already seen some of the flower shots that I took of my neighbour’s garden. 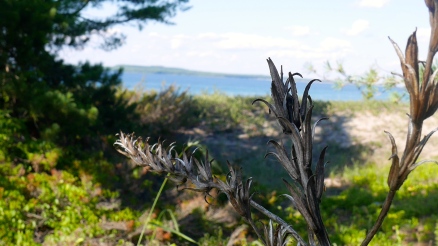 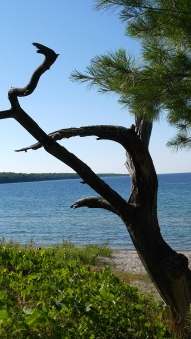 12 thoughts on “Opening the Cottage in August”