…. one by one farmers’ markets are shutting down for the season

The day started with the a cool breeze and sunshine. My husband and I decided to check out the farmers’ market in the Junction. We had never been there and it would be our only opportunity to pay it a visit. The market was due to close later today.

As soon as Frances saw us preparing to leave she assumed we were going for our usual walk. We couldn’t disappoint her so we bundled up and fastened her into her Buddy belt. We ended up doing the usual route and gave her a good workout before heading back to the house. By the time we returned we decided that our plan to bike to the market wasn’t doable because the market was only open for another hour and a half.

So we took the car. The day progressively became cloudier and cooler.  Parking in the Junction wasn’t a problem but we did have to ask someone where the market was located. Luckily we were close.

Caught on camera at the Junction Farmers’ Market The market proved to be interesting. It wasn’t huge but it had some interesting vendors. We bought spinach, pears, vegetarian samosas, pepper jelly, radish relish, humus and homemade crackers.

We walked back to the car and unloaded our purchases and then walked to The Bean Cafe. We enjoyed a couple of cappuccinos and I must admit we each enjoyed a vegan oatmeal pumpkin cookie. (picture below) 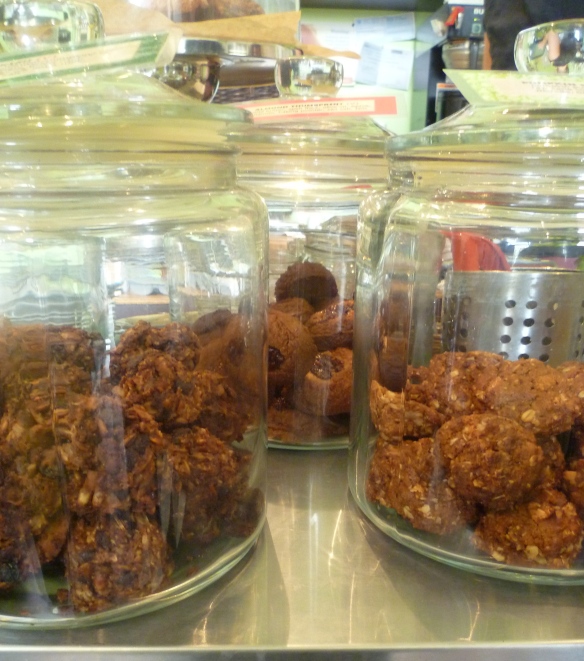 On our way home we picked up our daughter, G, who needed to do some work at our house. She told us about the pumpkin butter she had made and it inspired me to do something with the leftover squash I had cooked last weekend.

K quickly found a recipe on line for squash butter. Actually there are quite a few. The one I chose is pretty close to the one my daughter used, the exception being that it called for any winter squash. Now when my sister brought me the squash she had no idea what the variety was. She called it horse squash because it grew in the horse pasture on their farm.

After researching the different varieties of winter squash I’ve decided that the squash my sister gifted me was a kabocha squash.

Here’s the link for the recipe that I altered slightly.

zest from the lemon

1.  Puree the squash with an immersion blender.

2.  Place it in a large pot and add the remaining ingredients.

3.  Cook it for 20 minutes, stirring often, or until it reaches the consistency you like.

4.  Taste and add more sweetner (syrup, sugar or brown sugar) if you like it sweeter.

5.  Place in sterilized jars and seal. I didn’t put this in a waterbath. These jars will need to be refrigerated and used up within 3 weeks or you can freeze them.

My finished product isn’t very pretty. When you add the spices to the light yellow flesh of the kabocha squash it turns a pea soup greenish colour. Squashes with an orange flesh might be more appealing but then my husband said that pumpkin pie isn’t exactly ‘pretty’ either. However, it has a wonder flavour and would be great on toast and we dipped apple slices into it. Yummy! 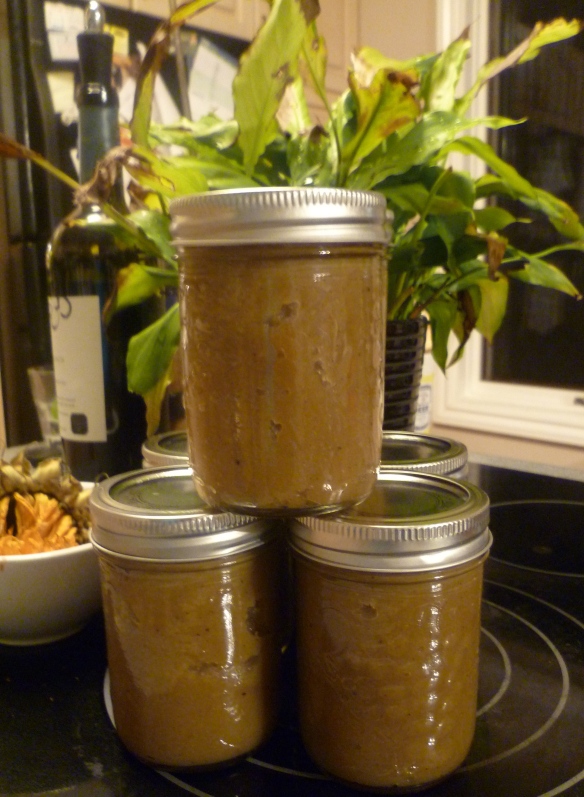