Last week one of my father’s oldest friends celebrated his 100th birthday. Back in June Fred phoned us and told us that he wanted to do something special for his milestone birthday. I assumed he wanted a big party but he surprised us by saying that he didn’t want any presents and instead he was hoping we would pledge a dollar a day for 71 days until his birthday. Every day he went out with his walker and walked 800 m in front of his retirement home and he hoped that any money raised would go to Forests Ontario.

Fred has always loved being in nature and doing his bit to save our environment. When he saw Capt. Tom from England raise money for the health care workers by walking every day he figured he could do the same but put any money raised towards planting more trees in Ontario. We gladly sent him money and looked forward to following his progress.

About two week before his actual birthday his daughter, Hilde, phoned us and told us about the arrangements that were being planned for the big day. The local newspaper and TV station got wind of his challenge and featured him in their newsfeeds. COVID was creating its own challenges for bringing people together so the numbers had to be limited. The event was going to take place outdoors but there was very little shade and people had to bring their own chairs.

In the end we decided it would be better if Dad and Fred got together after the actual birthday so that they could spend time together without being interrupted by the media, politicians and numerous guests. Two days after the birthday Hilde picked up her father and drove him to her house in Wasaga Beach and I drove my Dad from Toronto to Hilde’s house.

We learned that Fred had managed to raise over $5000. for Forests Ontario. The two men talked about fond memories of their choir days together while Hilde and I got caught up on the last 45 years. After a lovely lunch and a walk down memory lane we said our goodbyes and Hilde drove her father back to Barrie and Dad and I returned to Toronto. 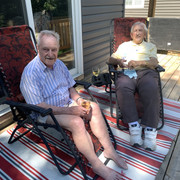 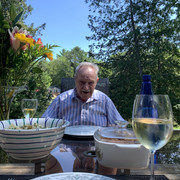 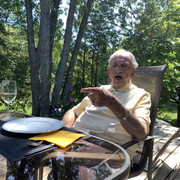 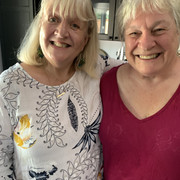 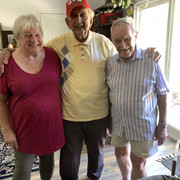